Just below the tip of the famous Italian boot, separated from the Italian peninsula by the Strait of Messina, you find Sicily, the largest Mediterranean island. There are various places in Sicily worth visiting, though I secretly have to admit that Catania is by far one of my personal favourites and shhh… don’t tell the others.

I mean they’re all special in one way or another, honestly with this being said, however, my aim is to try and entice you towards this specific destination so that you can experience its exceptional splendor.

Catania is the second largest city in Sicily and is located on the east coast of this Italian island, which means that one will be able to enjoy impeccable views of the crystalline blue Ionian Sea. Moreover this city is also situated just beneath the towering and outrageously magnificent Mount Etna. For me, the fact that Catania is found at the foot of a volcano, is reason enough to visit. However, there are many other reasons as to why you should plan to visit as soon as possible.

Before I do start with my pitch for Catania, however, a little history about the city would definitely not go amiss. To a great extent it can be said that Mount Etna contributed considerably to Catania’s evolution. Throughout the years there were several instances where volcanic eruptions destroyed the city, the worst of which occurred in the 17th century. Hot, molten lava covered the city causing devastation in 1669, and then not long after in 1693 an earthquake shook the town down to its foundations. This shocking calamity instigated a phenomenal rebuild; the whole of the old part of town was reconstructed using Baroque style, and wide open squares and avenues were incorporated into the new city design. What really sets this city apart from other parts of Sicily, however, is down to the building material that was used - Lava. This explains why the city is regarded as a ‘grey’ city but also why this perception contributes to its unique allure. 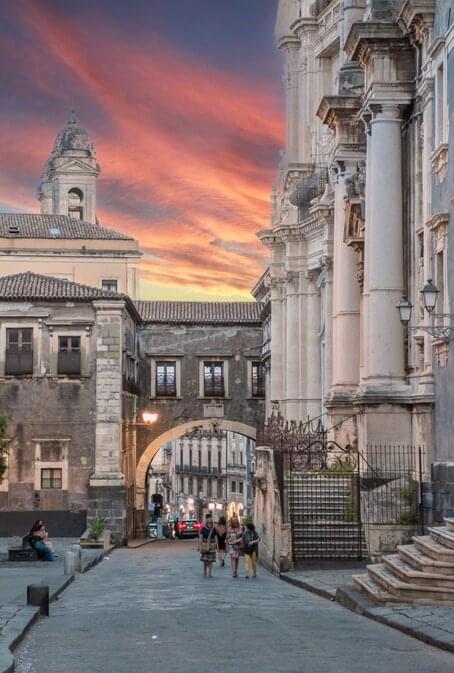 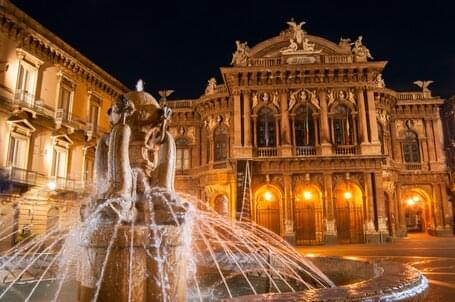 Despite Catania being regarded as a large urban complex, this doesn’t put a damper on the historical aspect of the city. A great starting point for those travellers who wish to immerse themselves in the heritage and culture of Catania, is the main square known as Piazza Duomo. This piazza was designed by the commendable architect, Giovanni Battista Vaccarini, and it is decorated with striking Baroque style buildings. There are a few important ones, which I suggest you take time out to discover, including the Duomo – the cathedral dedicated to Catania’s patron Saint Agatha. Right beside the cathedral lies the impressive structure of Badìa di Sant’Agata, which complements to the grandness of the square. At the very centre of the piazza, one cannot miss the city’s symbolic monument Fontana dell’Elefante which is a lava elephant fountain carrying an obelisk and bearing an inscription.

It is hard to choose what other history-riddled landmarks to point out since there are so many. Therefore, I do suggest doing a little research of your own before visiting, so that you can explore the sites which appeal to you best. However, I would like to give a shout out to the old fortress of Castello Ursino, and recommend that you also take a stroll around one of the remarkable theatres in the area.

For those people who seek to engage in open-air activities and adventure, Catania will not disappoint. The close proximity to Etna gives rise to a wealth of exciting opportunities for visitors. To start off with a more naturalistic approach, one should most definitely pay a visit to Etna Park in order to be able to delve into the magnificent natural environment this volcano has to offer. There are various trails available for exploring its slopes, some of which can be conquered through trekking and others which can be done on horse-back. Apart from this, there are also sightseeing excursions for discovering the many grottoes found in this park, and it is also the perfect location to go birdwatching.

On a different note, at the foot of Mount Etna, there also lies a totally different kind of park which enables travellers to experience the thrill factor some crave. This is Etnaland, an amusement theme park as well as an acquapark. It is a superb spot for families and groups of friends, and offers up a ton of fun, excitement and relaxation through its different rides and attractions. Additionally, visitors may also be transported back in time to the prehistoric era, by embarking on a scientific journey among reproductions of dinosaurs and humanoids that lived on our planet millions of years ago.

In the summer months, tourists are spoilt for choice due to the lovely warm weather that graces the island. One may simply opt to lounge around at a beach all day, or partake in one of the numerous seaside activities available; such as scuba-diving, snorkelling, or even surfing. Alternatively, and for the ski-enthusiasts out there, Etna is also an excellent destination to visit during the winter months - a time when it is completely covered in snow. What makes a winter-time visit even more unique is the fact that one would witness and experience the transformed snow-covered mountain, and at the same time, still enjoy the exquisite view of the enchanting blue sea - an impressively contrasting image.

The fish market La Pescheria may be considered as an iconic cultural attraction in Catania, and whether you like fish or not it’s well worth a walk around. The fishy smell, vibrant colours, and hustle and bustle is an experience in itself. Not only that but for any of you that like free tidbits, you also get the chance to taste a lot of the fresh fish and seafood. Apart from street markets, Catania is also home to countless craftsmen, artists and small businesses. Furthermore, no city is complete without a busy shopping street or mall, so if you want to splurge a little, go on a shopping spree along Via Etnea or pay a visit to Porte di Catania Shopping Mall which is just outside the city centre.

Catania is home to some oh-so-delectable signature culinary delights – which I strongly urge you try. After all there’s nothing worse than living with regrets. Conversely, there’s nothing better than getting a taste of the real deal, so ordering up a dish from where it originated from is sure to go down as a treat. 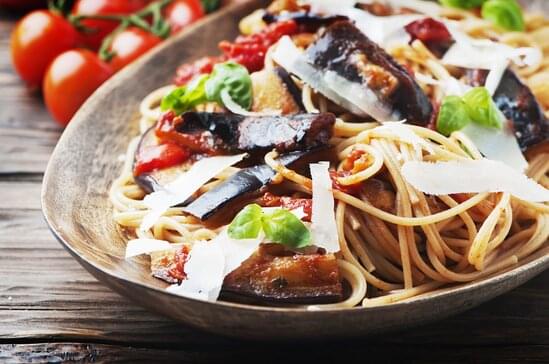 One of Catania’s most renowned dishes is Pasta alla Norma.  The pasta is tossed in rich tomato sauce accompanied with pieces of deep fried aubergines and salty ricotta cheese. A little interesting fact surrounding this tempting dish is that it was named in honour of the local composer Vincenzo Bellini who created the successful opera Norma. Another popular recipe from this area is Pasta con i Masculini which is topped and served with fried anchovies – a good choice for those fish lovers out there. More traditional savoury delicacies are Scacciata Catanese, homemade bread-dough pies filled with any local cheese and complementing ingredients such as anchovies and a variety of different vegetables, as well as Arancini di Riso. The latter are rice balls found all over Sicily, however, what makes them unique in Catania is that they are long and cone-shaped, and typically filled with ragu, peas and mozzarella.