Its reputation as a major financial centre means that Frankfurt is often dismissed as a ‘dull business city’ and is almost completely overlooked by ‘citybreakers’.

Few European cities are as defined by their skylines as Frankfurt and a great way of taking in the topography is by cruising down the Main.

But you may be surprised to learn that it makes a perfect short visit destination. Despite its relatively small resident population (700,000 compared to London’s 8.6 million), it has established itself as an international city in its own right.

Already, more than half of its inhabitants have non-German backgrounds and more than 100 different languages are spoken daily. Moreover, its growth as a financial hub has also contributed to the development of a diverse art, music and food scene that is only getting more alluring for travellers.

Plus, the swanky hotels are a bargain on the weekends when the businessmen have left! 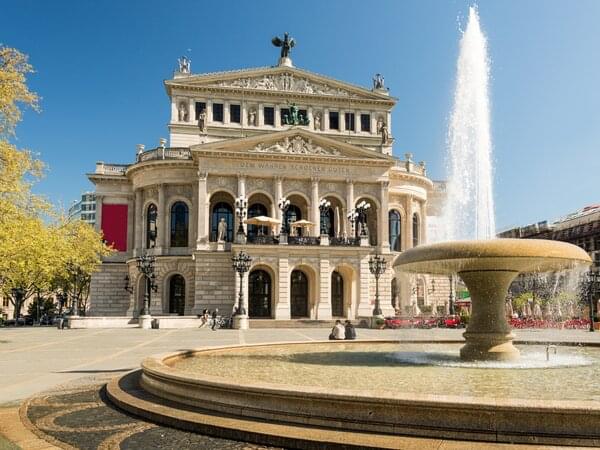 Spread along both banks of the Main River (hence its formal name, Frankfurt am Main), the city has always held a special place in German history. It gave the country its most famous writer, Johann Wolfgang von Goethe, who is as important to Frankfurt as William Shakespeare’s home is to Stratford, England. His house is tucked away on a small downtown street, which was also the site of important elections and the coronations of kings and emperors of the Roman Empire.

Like so much else, the original Goethe House was destroyed during the war. Still, the 1950s reconstruction provides an evocative feel for the early life of Goethe, who was born into a wealthy Frankfurt family and later forsook his hometown. Many rooms are furnished with late baroque pieces and art, which makes it feel as if the Faust author just stepped out.

History is still a major tourism draw for the city, even though many sites had to be rebuilt after  World War II.

But exploring Frankfurt through a historical lens only paints one part of the picture. To get a full view of what Frankfurt is now — and will become in the next few years — you need only look towards its skyline. Locals liken it to Manhattan and more affectionately ‘Mainhattan’.

At the base of the tall, glass structures, the modern thoroughfares and complexes such as the MyZeil shopping centre, are lined with boutiques and popular stores and throughout the city, cafes, bars and clubs provide ample entertainment value.

The glass roof of Zeil has a ‘tunnel’ section stretching down from the top of the building, making a stunning piece of artwork to reach the floor. The shopping centre is also home to the largest bouldering centre in Europe, ideal for anyone who likes climbing as well as Germany’s largest escalator, measuring a staggering 46 metres. Just don’t look down as it’s seriously steep! Few European cities are as defined by their skylines as Frankfurt. And a great way of taking in the topography is by cruising down the Main.

Flowing 527km between Mainz and Bamberg and passing through 3 German states (Bavaria, Baden-Württemberg and Hesse), the Main River is one of the main tributaries of the mighty Rhine River. Attractions like Museumsufer (Museum Embankment), Frankfurt Cathedral, Frankfurt’s famed financial district, and Europaturm, the city’s tallest building, are all visible along the waterfront. Boats also sail past the Grossmarkthalle. Frankfurt suffered in World War II, as did many German cities. Unfortunately, this reduced one of Europe’s largest medieval cities to a pile of rubble. Only the city’s first skyscraper, the ‘Dom Cathedral’ and a scattering of other elderly buildings, survived the attacks.

Choosing not to wallow in the past, Frankfurt’s city planners elected to look to the future, clearing large areas of the city and investing in modern transport networks and business. This is not to say there is nothing of the past to see today.

You can get in the old-world mood with a stroll through Römerberg, the heart of what used to be the largest medieval quarter in Germany. The half-timbered houses are ‘picture-perfect’ and well they might be since fifteen historic houses were meticulously rebuilt and 20 new ones were built in the traditional style after being flattened in World War II.

Visitors can now enjoy the timber-framed buildings, as well as the lively square in the heart of Römerberg. Some of the most notable buildings there are the Old St Nicholas Church and the Haus Römer, which together with the Goldener Schwan (Golden Swan) building belonged to the Römer merchant family in the 15th century.

The city planners also turned their thoughts to the arts and tourism, creating a vast array of museums and galleries, including the celebrated ‘modern art museum’ and the collection of museums along the south bank of the River Main affectionately known as Museumsufer or Museum Embankment. 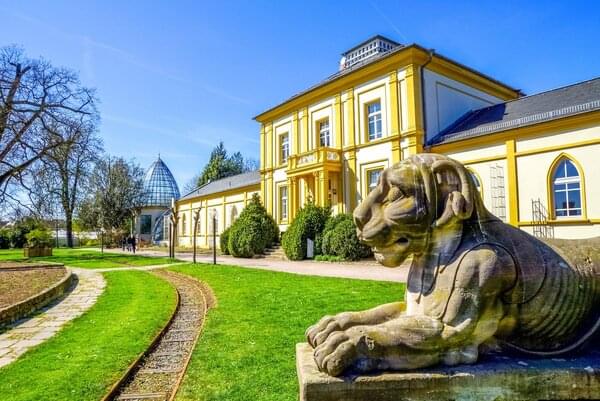 The Staedel Museum is a 200-year-old institution and houses one of the world’s most impressive and important collections, documenting 700 years of art history alongside visiting exhibitions. Visitors may recognize popular works of art such as Edgar Degas’ ‘Orchestra Musicians,’ Claude Monet’s ‘The Luncheon,’ and Rembrandt’s ‘The Blinding of Samson.’ Other artists you’ll find in the museum’s permanent  collection include Vincent Van Gogh, Edvard Munch and Picasso.

The Dialogue Museum on the other hand redefines the common perception of a museum which, by definition, is a place where you go to see artifacts: see being the key word. The concept behind Dialogue Museum, is unusual but impactful.

Guests join a one-hour guided tour that moves through four rooms where, in absolute darkness, you will get to experience daily life without any visual components, the way visually impaired people do. (All guides, as a matter of fact, will be visually impaired.) You will be surprised at the range of emotions you can feel in just 60 minutes — utter hopelessness being a major one — but it’s an incredible experience.

The changes in Frankfurt are also very apparent in the Bahnhofsviertel, the district around the main station, which was known for its high level of drug trade and prostitution. This image is changing as artists move in and lots of bars, cafés and shops open. This just proves that with its neighbourhoods, banking district, art centres and apple wine taverns – Frankfurt has many faces.

One of those faces is the steel and concrete. In contrast, Frankfurt also has a sublime botanical garden. The Palmengarten, which can be discovered in the middle of the fashionable Westend, has 50 acres of tropical trees, orchids and ferns. Many are tended in greenhouses, like the Tropicarium, which has a mini-rainforest. A children’s train wends its way past the park’s lake and gardens and the garden is often host to dozens of concerts in the summer, as well as being a scenic wedding destination. It’s also the perfect place to enjoy a picnic and wile the day away in the sun.

On the south bank of the river lies a quieter part of the city. The area of Sachsenhausen – the city’s most beguiling quarter – hugs narrow alleys and old buildings and is renowned for its nightlife and local drink ‘Ebbelwoi’ or Apple Wine. To say it is an acquired taste doesn’t quite do it justice.

Few other cities in Germany would want to claim this tangy brew, which is made with fermented apple juice and served in glazed jugs known as Bembel.

One of the most fun ways to try it is to jump on board the ‘Ebbelwei Express’ – a multi-coloured tram that takes you on a one hour tour of the city, accompanied by traditional music, pretzels and a glass or ‘two’ of the special brew!

Alternatively, in the northeast corner of the city, the one-time village of Bornheim retains its laid-back atmosphere and cafe culture despite being fully incorporated into the big city.

The Kleinmarkthallem, which is the centrally located little brother of the wholesale market, teems with life on Saturdays. Locals converge on this two-story covered market for fresh fish, cheese, bread, olive oil and, yes, an artery-clogging assortment of sausages. From there, it’s a short hop to the retail district, which features a full complement of designer boutiques on Goethestrasse.

If the shopping makes you peckish, head for the neighboring Fressgasse (literally, feeding street). Frankfurt may be synonymous with link sausage, but when Frankfurters go out, they crave anything but German food.

Trattorias, tandoori places and Thai cuisine are all well represented. Most restaurants, even small ones, have at least a few menus in English. But if they don’t, the friendly staff will surely translate for you.

The beautiful city of Frankfurt is often referred to as the gateway of Europe with an abundance of cultural diversity, historic buildings, modern architecture, great shopping avenues and the friendliness of the local people.

Frankfurt remains aloof from other popular destinations of Germany by offering unhindered and non-congested sightseeing opportunities despite being a unique and colourful place to visit.