The World-Famous BBC Concert Orchestra is back in Malta, followed by a concert from Pete Tong and the Heritage Orchestra

It has been a long time coming, and finally, the Malta Tourism Authority is proud to announce that, on the 24th September 2021, the Granaries in Floriana are set, to once again welcome the world-famous BBC Concert Orchestra for what promises to be an extravaganza of sound as they tell the story of one of the world’s greatest rock bands.

It’s a Kind of Magic – The Queen Story is a spectacular concert that tells the story of Freddie Mercury, Brian May, Roger Taylor and John Deacon through their extraordinary hit songs, and through the songs of the music legends who inspired them. The 60-piece BBC Concert Orchestra and a dynamic rock band, together with a cast of star singers will perform songs by Jimi Hendrix, Led Zeppelin, Aretha Franklin, John Lennon and more, together with Queen classics, including a recreation of the whole of the legendary Live Aid set from Wembley Stadium. Hosted by Tony Hadley, superstar lead singer of the iconic 80’s band Spandau Ballet, Tony will also pay tribute to Queen lending his amazing voice to one of their most iconic hits.

Tony Vincent, star of the hit Queen musical ‘We Will Rock You’, along with leading vocalists Vanessa Haynes, Rachael Wooding, Ashton Jones, Tim Howar and leading vocal group Capital Voices, will perform a staggering line up of Queen hits including Killer Queen, Somebody To Love, Don’t Stop Me Now, Under Pressure, We Are the Champions, Bohemian Rhapsody and more!

Pete Tong Classics, on the 28th September 2021, promises to be an iconic classical electronic music event which is inventively bold and brightly reimagined.

Three albums in with Classic House, Ibiza Classics and Chilled Classics, Tong and co are owning the dancefloor and the concert arena in a wholly fresh, forward-thinking way.

“The return of the BBC Concert Orchestra and the addition of Pete Tong and the Heritage Orchestra are of sterling news for the entertainment industry. As we continue heading on the path towards normality, it is crucial that the Maltese public remains responsible with full respect of the regulations outlined by the Superintendence of Public Health. I wish all the best of luck to the artists & organizers and a special thanks to the Malta Tourism Authority who played a paramount part in making this event a reality,” Minister for Tourism and Consumer Protection Clayton Bartolo stated.

“Although it feels surreal, but we are more than happy to have reached this important milestone. Months and weeks of sacrifices by the Maltese public have brought us here, in a position where we can organise a controlled seated event of this scale, following all the regulations, and ensuring everyone’s safety. We are proud to welcome back the world-famous BBC Concert Orchestra for their second concert on The Granaries, which, I am sure, is going to echo the great success which the concert had in its first edition. On the other hand, we are also honoured to be bringing Pete Tong and the Heritage Orchestra to Malta in what promises to be an innovative experience for all those attending,” said Johann Buttigieg, CEO of the Malta Tourism Authority.

Tickets for ‘It’s A Kind of Magic – The Queen Story’ and for ‘Pete Tong Classics’ are available at www.visitmalta.com – Booking early is highly recommended since the number of available tickets is limited. 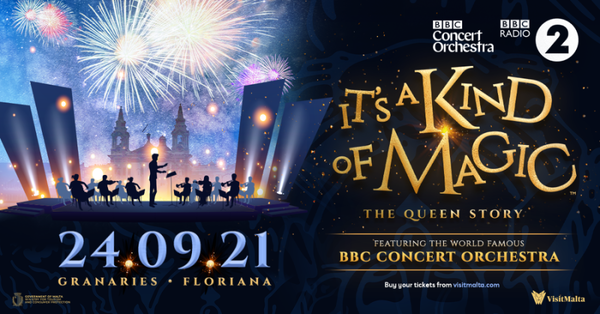 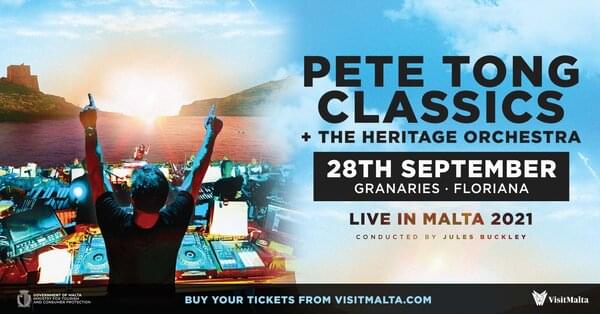 This event, is being organised following the COVID-19 protocols currently in place by the Health Authorities. The maximum safety of the musicians, the performers and the audience remains a top priority throughout.

For this reason, when booking tickets online at visitmalta.com – which can be up to a maximum of 6 people per group, people will also be asked to confirm that they are in possession of a valid COVID-19 Vaccination Certificate.

There will be maximum groups of 6 seats with 2m distance between groups, and overall bubbles will be of a maximum of 340 people. Each bubble will have its own queuing system & amenities. Temperature will be checked upon entrance & and an approved vaccine certificate needs to be presented together with an Identification Document.