Gozo is an island brimming with over 7,000 years of dramatic history, with many captivating legends passed down from GENERATION TO GENERATION. There are tales of saints, giants, fair maidens, barbaric pirates and slaves. Like Sansuna, a giantess with super-strength, who is said to have easily lifted the huge stones used to build our ancient Ġgantija Temples in Xagħra.

It’s no wonder then that if you ask any local about their favorite legendary tale, they will happily recount from among the vast number of stories linked to our landmarks.

The Legend of San Dimitri

The legend of heroic San Dimitri is a popular local tale involving a mother’s love for her only son, barbaric pirates, and a saint who saves the day. An old widow Natalizja Cauchi, known as Żgugina, lived near Ras San Mitri (The Cape of St Demetrius), a remote westerly part of Gozo beyond Għarb renowned for its rugged scenery and treacherous coastal conditions. Every day, Żgugina visited St Demetrius Chapel near her home to pray for the protection of her son, Matthew. At that time the island was regularly ambushed by marauding Turkish pirates who would steal the islander’s food and possessions and attempt to enslave its people who were particularly at risk from these perilous attacks.

One day a Turkish Galleon arrived and soon after, boatloads of pillaging pirates came to shore. The invaders ransacked St Demetrius chapel and Żgugina’s modest home. Outnumbered and scared, she prayed for protection, but the pirates destroyed her home, beating Matthew before forcibly shackling him and returning him to their pirate ship as a slave. Żgugina pleaded for her son’s mercy by the shoreline but the pirates mocked her. Inconsolable, she visits the ruinous chapel and notices that the painting of San Dimitri is still intact above the altar and prays for help, reciting repeatedly “San Dimitri, give me back my son. Only you can perform this miracle”.

The legend goes, that the heroic saint who was pictured on horseback, gallantly and gloriously takes human form and then gallops out from this painting, out of the chapel and towards the sea in pursuit of the pirate ship. Not long after he returns to the chapel carrying Matthew, reuniting mother and son. Overcome with emotion Żgugina embraces her son and is so pre-occupied she fails to notice San Dimitri retreat back into the mural.  As a poor, humble islander, Żgugina shows her gratitude by lighting an oil lamp in front of San Dimitri’s mural and keeping it alight every day. Some say the area was later damaged by a landslide and that this small 15th century chapel ended up submerged underneath our seas, remaining peacefully intact.

Many years later, divers exploring the seabed claimed to have stumbled across an intriguing chapel with an alluring glow emitting from an oil lamp still burning brightly, not knowing this was fuelled by a mother’s love, giving thanks to the saint who saved her son. Nowadays, a 17th century chapel stands where St Dimitri’s Chapel once stood and if you were to visit, you will notice the altarpiece depicting the San Dimitri legend, with a mother in prayer, a son chained and an heroic San Dimitri on horseback.

The legend of Calypso

The origins of the legend linked to Calypso’s Cave in Gozo is found in Homer’s Greek epic poem The Odyssey, and many locals believe Gozo is the mythical island of Ogygia referred to in this ancient text. This story involves the heroic Greek warrior Ulysses, who was kept a prisoner of love by the beautiful nymph Calypso in a cave by the cliffs overlooking the red sands of Ramla Bay. 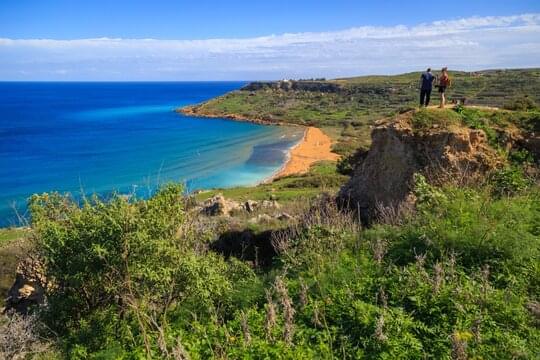 Ulysses had been sailing home to Ithaca after the Trojan war, following the siege of Troy when his ship was struck by tremendous thunderstorms. His shipmates all perished in the sea storms and for nine days and nights Ulysses battled the unrelenting tempest single-handedly. Finally, he was washed ashore clinging to debris from the ship in the direction of an unfamiliar island, brimming with beautiful flowers and with trees laden with bountiful fruits – the island of Ogygia.  Lured by the song of the beautiful nymph Calypso, Ulysses ventured into a cave high up in the cliffs to take some rest. It was here that he met Calypso, daughter of Jupiter, the God of War, and the Queen of Ogygia – who enchanted Ulysses. Calypso was a captivating, beautiful nymph offering Ulysses all the food, wine, love and power any man could ever wish for. Although, legend states Ulysses’ dearly wanted to return to Ithaca, his homeland, Penelope, his wife, and Telamon, his son. Calypso offered Ulysses her island’s kingdom, eternal youth and happiness and it is said he remained spellbound under her influence for seven long years, until the gods took pity on him and ordered the nymph to release him. After Ulysses was released he built a boat and set sail towards his home.

We’ve always known Gozo is a remarkable island, full of historical and geographical treasures – these legends only add to its mystique. Why not visit to discover this legendary little island, and start your own memorable journey?