When Brussels comes up on the news or in general conversation, the subject matter is invariably the city’s role as the centre of the EU, especially in the current climate!

When Brussels comes up on the news or in general conversation, the subject matter is invariably the city’s role as the centre of the EU, especially in the current climate!

Spring is one of the best seasons to enjoy all the attractions in Belgium. As days get longer, it’s never too cold or too warm. It is also the time when nature awakes after its long winter sleep, bursting with colour and fragrance.

While many tourists head to the Netherlands to admire the tulip fields, few know that Belgium is a flower lover’s paradise as well and that Brussels is one of the greenest European capitals, with a multitude of parks, each one with its own history, architecture, trees, plants and flowers.

Just outside the city, at the same time, you can find Hallerbos, where millions of bluebells blossom to create a magical blue carpet that covers the floor of this beech forest. To best experience it, pay a visit early in the morning or at night when the smell of the blossoms is at its strongest.

In a slightly different vein Hasselt’s is the largest Japanese garden in Europe.  It is an ideal place to walk around, meditate and contemplate nature. In the spring, the garden takes on a magical feel thanks to its 250 cherry trees in bloom.

Spring is also the time to visit the Royal Greenhouses, which are open to the public only for few weeks every year (mid-April to early May). An outstanding example of 19th-century architecture, they occupy an area of 2.5 hectares.

Beauty though is not only confined to nature’s offering. Brussels arguably contains the world’s most beautiful square.

The Grand Place framed by the Town Hall and opulent guildhalls is lined with restaurants and lively cafes. It is at the heart of city life and was once a market, bombarded in the 17th-century (and then rebuilt). Today it is a major convening point of Brussels tourists and a ‘must-stroll’. In 2010 it was voted the world’s most beautiful square, ahead of Moscow’s Red Square and Place Stanislas in Nancy.

Having highlighted the city as an alternative to Amsterdam in the floral stakes, the city can also challenge France in the food stakes.

The standard of cooking in Belgian restaurants is very high with some commentators saying you can eat better here than over the nearby border – even though the style of cuisine is essentially French.

The Belgians themselves have a highly developed nose for good food: they like it to be seasonal, based on good-quality ingredients, cooked with fine judgement, and good value for money – and they won’t stomach pretension.

But all said and done the country still offers its classic indulgences. Clichéd maybe but… waffles, frites and chocolate. Regardless of whether you have a sweet tooth or not, Belgian waffles are so good that they will make you consider not just travelling to Brussels but maybe even moving permanently! When you breathe in, the air smells like waffles all around the city centre, so it is practically impossible not to give in. Make sure to look out for the little yellow waffle trucks or head directly to Maison Dandoy for the best gaufres in town.

Just like Belgian waffles, the famous frites are almost as addictive. Sure, they’re not the healthiest or fanciest snack  out there but they’re crispy, tasty and indeed cheap like chips! Sold in small stalls around the city, they’re fried twice in beef tallow and come with different sauces. Spotting the best frites is a serious affair in Brussels and everyone has their favourite “fritkot”. Be prepared to wait in a line as there’s always a queue, but it’s part of the charm!

If waffles and frites don’t tempt you, then I’m sure you won’t be able to avoid Belgian chocolate. Almost everywhere you turn the enticement will be confronting you from the windows of countless chocolate shops. You’re on holiday so indulge.

Browse too through the creations of famous chocolatiers (Laurent Gerbaud, Pierre Marcolini and Frederic Blondeel. Having let yourself go with the food (and you will give in), never shy away from a tipple in Brussels.

Belgian enthusiasm for the amber nectar is no secret, so a visit to the capital must in some way pay homage to the hops, weiss, Flemish or otherwise. Many of the city’s best beers are brewed by Trappist monks. There’s a beer for every taste and countless bars around town where you can get a pint.

Try Moeder Lambic on Place Fontainas, a ‘kind of shrine to beer’ or Delirium Cafe which offers some 30 beers on tap and more than 2,000 more from the bottle. Or you can also go directly to the source and visit some of the local breweries like the Brussels Beer Project, Brasserie Cantillon and En Stoemelings.

Aside from food, drink and flowers there’s also a lot more to Brussels.

The city has a wealth of museums, but the Musée de la Ville de Bruxelles, on the Grand Place, should be visited to lay eyes on early versions of Brussels’ mascot, the Manneken Pis – the statue of the little boy doing what his name suggests, which lies a short walk away, to the west. 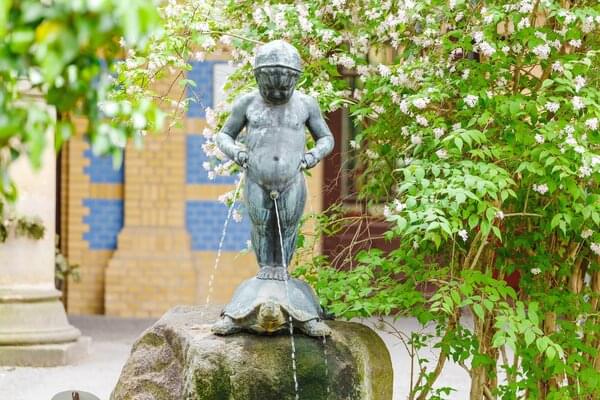 You can also visit the spot where Napoleon was vanquished. The site of his final defeat in 1815 is about nine miles south of Brussels, three miles south of the small town of Waterloo. The battle site has a number of interpretive exhibitions and museums. With a little background research you can make much more sense of the landscape and people with your imagination. Once brought to life in this way, it becomes a compelling place to visit.

From serious to wacky, another ‘must visit’ place is the Atomium, a weird and wonderful building that was constructed for the 1958 World’s Fair in the city. Standing proud at 102 metres in height, the nine 18 metre diameter stainless steel balls are connected in such a way that the shape, as a whole, is the same as the unit cell of an iron crystal magnified 165 billion times. (Impress your friends at a dinner party with that fact!)

Each sphere hosts an exhibit or public space, while the top ball is home to a restaurant with panoramic views over Brussels.

While the Grand Place is ‘classic’ and the Atomium is wacky, Brussels doesn’t stop there, for it is also the capital of Art Nouveau. This is where architects Victor Horta and Paul Hankar designed the first Art Nouveau buildings in the world: Hotel Tassel and the Maison Hankar. Besides visiting the Horta Museum, you can also admire many beautiful Art Nouveau buildings like the Maison Cauchie and MIM just walking around the city. What is perhaps lesser known is the Art Deco heritage of Brussels. Luckily, the Van Buuren Museum, the Flagey building and Villa Empain are vivid reminders. And if you have a thing with architectural details make sure to pay attention to Brussels’ beautiful doors.

They say that visiting a flea market is the best way to get a local flavour of a city and this is very true in the case of Brussels. There are many great markets organised around the city, so no matter the day or area you are in the chances are there will be one to explore. Some are noisier (e.g. the Marché du Midi on Sundays), others younger and livelier (e.g. the Chatelain market on Wednesdays) and then there are those that are simply a foodie’s (e.g. the Flagey market or the gourmet market in the Sablon) or vintage lovers heaven (e.g. the flea market in Place du Jeu de Balle).

At these flea markets you are sure to find lots of comics as comics in Belgium are serious business. With hundreds of comic book authors and famous characters like Tintin and the Smurfs, the country has a rich tradition when it comes to the so-called ‘bandes dessinées’.

You can get your fix from the flea market, at specialised shops and the Belgian Comic Strip Centre or why not try the comic strip route, a great way to see the city while admiring beautiful murals. The project started back in 1991 and is still being enriched with new paintings.

In summary Brussels is so much more than the sum of its diplomats and in many respects – culinary, cultural, architectural – it remains one of Europe’s most underrated places to visit. Small and compact, with an incredibly decadent centre, a visit won’t disappoint.