FALL IN LOVE WITH LYON

WITH MORE THAN 2,000 YEARS OF HISTORICAL HERITAGE, WORLD-FAMOUS FOOD AND A FASCINATING CULTURE, IT IS VERY EASY TO FALL IN LOVE WITH LYON.

Lyon is France's third-largest city and offers today's explorers a variety of alluring experiences. It is also a city where it can be said that its whole is greater than the sum of its parts.

Commanding a strategic spot at the convergence of the Rhône and the Saône Rivers, this UNESCO World heritage site has been luring people ever since the Romans named it Lugdunum in 43 BC.

A commercial, industrial and banking powerhouse for the past 500 years, today it offers fantastic museums, busy drinking and nightlife scenes, superb shopping and last but not least, it’s a great spot for adventurous foodies to indulge in their wildest gastronomic fantasies. Collectively, these attributes create a sophisticated vibe.

Where to begin in this enthralling, richly storied city? Getting your bearings is always a good start and you can do this by heading to the top of the Fourvière hill. It is like travelling through time, back to the Roman era.

To walk up it, you must be ready to face one of the famous ‘Montées’ (slopes). There are several rises which link different parts of Vieux-Lyon to Fourvière Hill and some of them are stairs. The longest one is the Montée des Carmes-Déchaussées, combined with the Montée Nicolas de Lange. You must use them if you want to join Fourvière Basilica from the Saint-Paul area in the northern part of the old town. But you had better be ready to climb their 798 steps! A very pleasant alternative is to use the funicular.

Crowning the hill is the iconic Basilique Notre Dame de Fourvière, built in Romanesque and Byzantine style. The panoramic view from the esplanade is breathtaking. If you don’t mind a bit of a workout (i.e. climbing 345 stairs), you can join the guided rooftop tour to get an ultra-exceptional view. 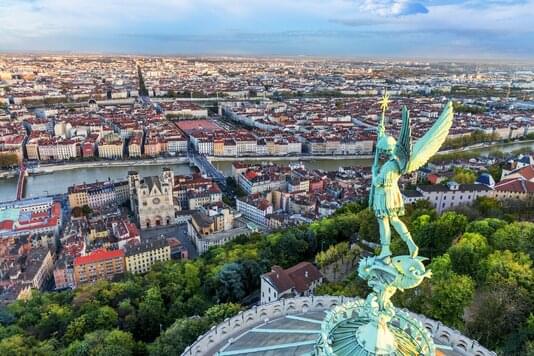 Once you have your bearings you’ll be better able to explore the city divided into nine arrondissements (districts).

There’s a great public transport network comprising four metro lines, two funicular railways, five tramways and numerous bus routes, that will get you to all corners, alternatively rent a bike or E-Scooter.

A good district in which to base yourself is Part-Dieu (3e Lyon arrondissement), located on the east bank of the Rhône river. It is less touristy than other districts, yet very convenient to get to everywhere.

Wherever you choose to stay, Marché Saint-Antoine by Saône River is the perfect place to start your mornings. This outdoor food market is the largest in Lyon and is where the locals go to buy fresh produce and meat. Cooked items (e.g., rotisserie chickens), cheese, bread and even regional wines can be found there!

From there you have three other arrondissements to visit. These are Renaissance Old Lyon ('Vieux-Lyon'), the Croix-Rousse, which is famous for its historical importance in the silk trade and the Presqu'île (which means 'peninsula').

Starting with Vieux Lyon, this is the perfect place to get a feel for the history of Lyon. A secret and mysterious district, the façades of the buildings may appear plain from the outside, but visitors are astounded when they dare to peep behind closed doors where the inner courtyards reveal the great wealth of their former owners.

Another way to explore is via the traboules, secret passageways found only in the city of Lyon. Built between buildings through courtyards, these secret alleyways and staircases were used in the 19th century by silk workers to transport their products quickly between places without getting them wet or damaged in poor weather.

There are as many as 400 traboules, mainly found in the Vieux Lyon and Croix-Rousse areas, but only 40 of them are open to the public today. The best way to explore them is by joining a guided tour as they can be quite difficult to find (well, they were supposed to be ‘secret’ after all.... )

Of the two hills in Lyon, the second - the Croix-Rousse district - often surprises visitors due to its unusual layout, with its buildings seeming to ascend the hillside in tiered formation.

The Croix-Rousse was formerly the neighbourhood of Lyon's silk manufacturers, and during the 19th century it reverberated with the sounds of the ‘bistanclaques’ (weaving looms).

With 30,000 canuts (name given to the silk workers in Lyon), the district was a hive of activity, and the city itself a major hub for textiles in Europe. Modern-day visitors can stroll through the area to discover its true essence and the many buildings specially built to house the weaving looms, amid a maze of traboules and stairwells. Here, past and present cohabit on a daily basis. Traditional silk workshops are open to visitors, and the boutiques of young designers keep the spirit of the canuts alive.

Lyon is not only about preserving historic buildings. What may come as a surprise  is the wealth of modern architecture.

Stroll around the Confluence district and you’ll find eye-popping, futuristic structures all over the neighbourhood. Formerly an industrial wasteland, La Confluence is one of Europe’s biggest urban renewal projects.

The third of the must-visit arrondissement is Presqu’île, the narrow peninsula in between the Saône and Rhône rivers and where residents and visitors alike go to shop.

From large department stores to quirky boutiques, the Presqu’île area offers a wide variety of shopping experiences. Whether you’re searching for the latest designer handbag or a stylish vintage dress, Presqu’île has the perfect shop for you!

Rue Saint-Jean, close to the gothic Saint Jean Cathedral, is home to numerous restaurants and stores. And in Rue du Bœuf, designer boutiques vie for attention with Michelin starred restaurants. As a dual-river city, both riverbanks are a must-see. There are a number of boats that have been  converted to restaurants and cafes along the Rhône, so you can grab a seat on one of these or along the pier and enjoy an afternoon treat or coffee!

The Saône meanwhile brings culture and classiness. Along this river are a variety of fancy cafes and restaurants. Be prepared to spend a little more for a meal on this side of town, but a walk along the river is free and breathtaking. 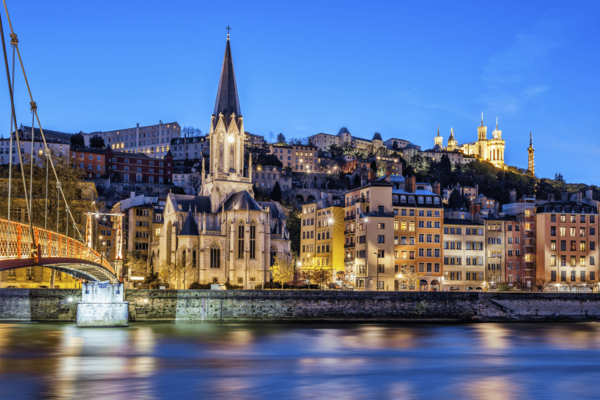 Lyon is globally renowned for its gastronomy and for decades has been lauded for the high quality of its produce and the prestige of its cuisine. Its ranks are swollen with famous chefs.

For an authentic, high-quality culinary experience, select an establishment with the ‘Les Bouchons Lyonnais’ label on the window. Bouchons are unique to Lyon and where silk workers went to grab a bite.

There are more than 4000 restaurants across the city from which to choose. If you only have time or budget for one, save it for the world-renowned Paul Bocuse Restaurant - every foodie’s dream. Also known as L’Auberge du Pont de Collonges and located just outside Lyon in Collonges-au-Mont-d’Or, this luxury restaurant is where the culinary giant Paul Bocuse - the 'pope' of French cooking - built his reputation and has maintained three Michelin stars since 1965! The exceptional food and service are worth a special journey and the financial outlay! 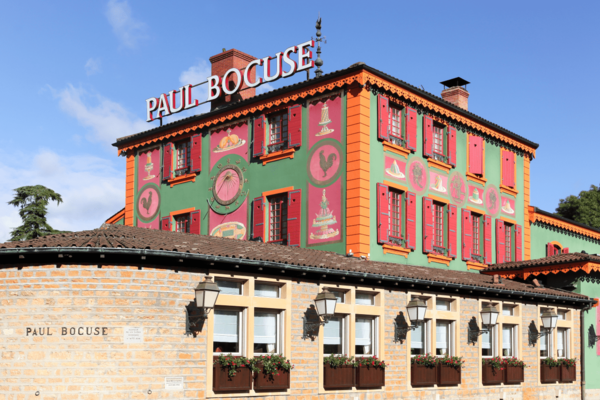 At the other end of the scale, visit the famed indoor food market (Les Halles de Lyon) comprising  nearly five-dozen stalls selling countless gourmet delights. Pick up a round of runny St Marcellin from legendary cheesemonger Mère Richard, and a knobbly Jésus de Lyon from Charcuterie Sibilia. Or enjoy a sit-down lunch of local produce, especially enjoyable on Sundays when local families congregate for shellfish and white-wine brunches.

French food isn’t complete without French wine and as the second largest wine region in France, Rhône Valley is among the top destinations for wine tourism. Beaujolais vineyards, spread across the hills and villages, are known for fruity, red, Gamay-based wines. Asmany as 14 wine routes can be explored either by car, on foot, by bike, on horseback, or even in the air!

Lyon offers both Francophiles and first-timers a glimpse of the good life in France. It manages to combine all the charm of an ancient capital with the vibrancy of a youthful, engaging metropolis. 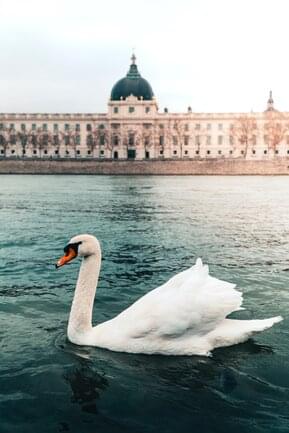 Book your flights to Lyon and find more information from airmalta.com. Please follow the latest Covid-19 guidelines with regards to travel.