Every year the Top 100 Destination Sustainability Stories competition collects sustainable tourism stories and good practices from destinations all over the world to be shared as inspiring examples to others, from tourism professionals to travellers. By telling their stories, destination management organisations can be acknowledged and recognised for the solutions they have implemented in response to challenges and problems they have faced. With the tourism sector facing very challenging times in the past years, the resiliency and hard work of these destinations to become more responsible should be celebrated.

The 2021 selection included the island of Gozo, with the restoration and regeneration project of ‘Tat-Tmien Kantunieri’ Windmill in Xewkija, Gozo. This project was commended by country experts and Green Destination Partners for bringing a long-lost historical building back to life.

The aim of the rehabilitation and restoration project of the Xewkija windmill was to provide an innovative cultural and historical tourism experience aiming to improve Gozo's tourism product. Apart from the aesthetic aspect, the project also included reconstruction and conservation works on the windmill’s mechanism.

The windmill was often overlooked and unutilised. Through this project, it has now become one of the most notable landmarks on the island of Gozo, especially given its central location just before entering Victoria.  The Xewkija Windmill is now to be utilised as a centre of events for folkloristic re-enactments and events which will showcase Gozitan heritage in the way of traditional Gozitan dress, dance and customs, thereby promulgating Gozo’s cultural patrimony not only to international visitors but also to domestic ones as they represent significant value.

The windmill, which is the oldest surviving in Gozo, was commissioned by Grand Master Perellos at the start of the 18th century. It was uniquely built in the shape of an octagon and each side is perfectly calibrated to match the compass points. The site consists of a large entrance hall, two large parallel rooms, and a kitchen at the back. A small piazza area was also created so that the viewing experience and accessibility of the windmill is improved. In the middle of the historical building there is a garigor (spiral staircase) leading up to the roof of the tower. The windmill started operating in 1710 by miller Ġanni Scicluna, it remained operational until a huge fire ravaged it in the nineteenth century.

The Xewkija Windmill gives Gozo another facet in its tourism offering by providing an experience which not only promotes but celebrates and showcases its cultural and historical heritage and folklore. The Xewkija Windmill represents a time long gone by not only from an infrastructural perspective, but also via the activities that are to be held. 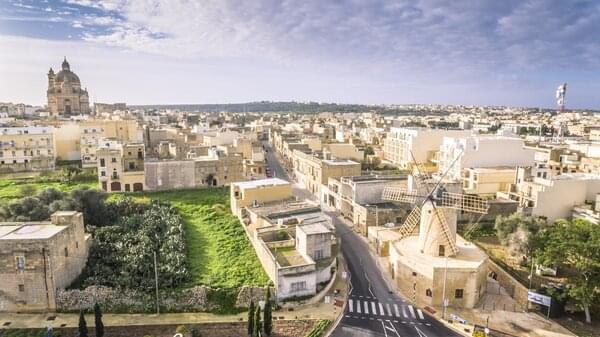 Maybe few know that over time, there were several grain windmills operating on the island of Gozo. Certain sources note as many as fifteen windmills scattered over the different villages of the island, some of which dating back several centuries.  A few have fallen in disrepair, others have been dismantled over time and some have been rebuilt or converted into private residencies.

It’s interesting to note that windmills were built within sight of each other such that the miller in one windmill had view of others. In this way, the windmills could serve as a form of communication system between the millers around the island.   Most of the windmills found in Gozo have a square or rectangular base, with a cylindrical tower in the centre of the building.  Usually one finds a series of rooms at the base of the building and the cylindrical tower features a spiral staircase that leads to the top of tower.

As the sails turned with the wind, they moved a heavy stone that ground the grain into the flour.  On the days, when the wind was strong enough to operate the windmill, millers informed the local villagers by sounding the triton-shell or ‘bronja’ as it was locally known.

In addition to the Xewkija Windmill, we’ve counted another 12 windmills that one can still see standing on the island of Gozo!

·       Maybe the most famous of all Gozitan windmills is the Ta’ Kola windmill. Immaculately restored and kept, this windmill in Xagħra is like entering a time capsule. The windmill, dating back to the times of Grand Master Manoel de Vilhena, is today a Heritage Malta Museum presenting how the miller’s living quarters and workshop would have been when the mill was operational.  In Xagħra, there is also another windmill.

·       In Qala one can still see two windmills standing. One complete with sails and tucked away in the village looks as if it is emerging from a storybook, whilst the other standing desolate in the fields on the outskirts is Qala is in a marked contrast with the first. One can also locate another windmill in Nadur, located in a small square, close to the centre of the village.

·       In Victoria one can find several windmills. Some are more easy to locate than others. One can find one windmill tucked away in Fontana in an alley close to the Lunzjata Valley and another is located in the street, just off St. Francis Square, known as the windmill at Għajn Qatet.  Yet another is found at the outskirts of Victoria in the area known as Ta’ Marziena facing the village of Sannat.  In Sannat, there is a windmill that has been recently rebuilt by the Local Council on what was once the original windmill.  This particular windmill tower is more of stump than a tower and in fact it is much lower than the others.

·       On the western side of Gozo, one can still locate a windmill in Santa Lucija just off the main square of the village.   Another typical windmill is located in one of the main streets of Għarb.  On the way to Ta’ Pinu, one can also glimpse a windmill located close to the Aqueducts.  Poised on a hill and in perfect vista over the surrounding countryside, this is also one of the windmills that many can recognise.

These windmills, the majority of which are private properties are like little gems, that give Gozo that extra special rural touch. 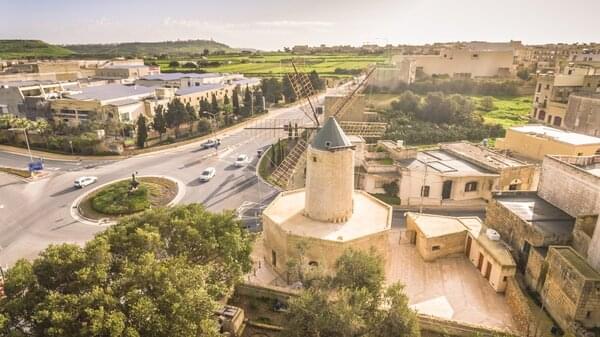