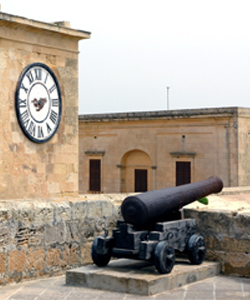 Victoria, or Rabat – its original name, is a bustling little capital in the centre of Gozo. While only 3 square Kilometres, the tiny town is packed with quaint shops, traditional bars, and exquisite restaurants.​

Victoria’s most identifiable feature is the Citadella – an ancient, fortified citadel of impressive magnitude. While the site itself has been developed upon since the Bronze Age, Citadella’s most interesting times were during the reign of the Knights of St John, when its fortifications were used as refuge from raiding Moslem forces and corsairs, the former managing to sack the citadel in 1551. The Citadella itself is a dominant feature on Gozo’s landscape and its ramparts appear all the more impressive under bright floodlights on a clear night. The bastions themselves are fairly well preserved, and within the walls, the well preserved prison and Baroque cathedral help illustrate this fortified town’s past.

As any visitor to the Maltese Islands during the Summer months can testify, the locals love a celebration. The traditional Maltese festa – a multi-sensory assault of fireworks, band music, and street food – is a rite of passage for all visitors to the Islands. The people of Victoria, with their 5 different feasts, know how to throw a party. The most popular on the festive calendar are the Feast of St George’s, featuring traditional horse races up and down the main drag, and the feast of the Assumption of the Blessed Virgin Mary in the middle of August, when Maltese and foreigners alike visit the Island in droves.

Victoria’s narrow, winding streets and busy squares lend themselves well to leisurely exploration on foot. Bring a camera along and take in the hidden gems like  it-Tokk – the open market where hawkers flog everything from colourful summer beachwear to antiques.