Milan: Discover all of Italy in One City

PACKED WITH ART, FASHION, HISTORY AND MOUTH-WATERING FOOD, IT'S NO SURPRISE THAT MILAN IS INCREASING IN POPULARITY AND CHALLENGING ROME AND FLORENCE AS ITALY’S TOP TOURIST DESTINATION.

Milan is attractive and charming, with a vibe that balances old world romance and history with urban grit and cosmopolitanism.

And of course, there's the shopping. This is the fashion capital of the world! From luxury high end brands to high street favourites and local designers, the city is every fashionista's dream as it caters to a whole host of budgets.

Lying at the foot of the Alps, Milan is indeed Italy’s financial hub and economic driver, home to the country's Stock Exchange and for football fanatics - two of Italy’s top teams: AC Milan and FC Internazionale. When these fierce rivals face each other, in the San Siro stadium they share, it’s well worth the price of admission! Milan is also Italy’s most cosmopolitan city, with a modern central district dominated by skyscrapers and a pretty historical quarter lined with palazzi (palaces) – each harbouring wonderful hidden courtyards.

Its dining and nightlife scenes rank among the country’s most vibrant. Bars line the city’s famous Navigli canals – said to have been designed by Leonardo da Vinci, who called the city his home for several years. The workday over, Milanese congregate for Aperitivo – drinks and snacks – before heading home for their evening meal. 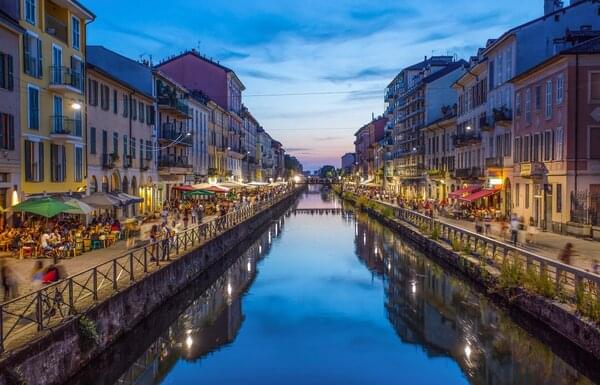 Milan is built in concentric rings starting from the Duomo, the city’s Gothic cathedral and focal point. North-east of its 135 spires and gold-plated La Madonnina statue is the fashion district, close to the cobbled streets of Brera, with its cafés and restaurants.

On arrival after getting settled in, one of the nicest things to do is relax and plan your stay over a refreshing cup of coffee. Nobody does it better than the Italians!

While your tour options are many and varied, they must include a visit to a true icon of Milan - the spectacular square and cathedral at the very heart of the city, the Duomo. This piazza, which dates back as far as the 14th century, is home to some of the city’s most important sites and buildings of architectural significance - so little wonder then that it is not only a must-see but something of a tourist hot-spot. 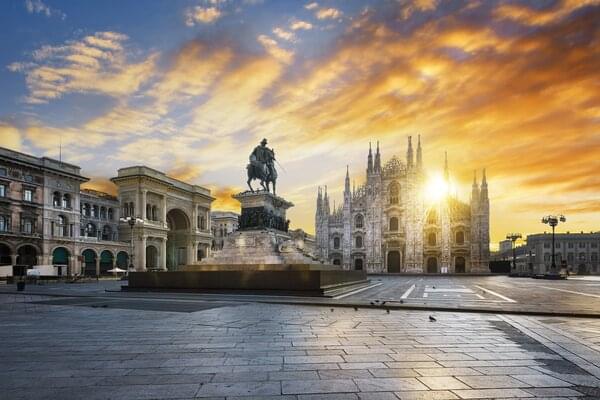 This jaw-dropping cathedral itself took nearly six centuries to complete, and the results are simply breathtaking. Towering over the city skyline, the Duomo, built with pink-hued white marble from the quarries of Lake Maggiore, is not only the largest church in Italy, but it's also the third largest in the world!

Depending on how early you started your day, find time to also visit the Parco Sempione, the biggest park in the whole of Milan. Dating back to the late 19th century, its picture postcard grounds extend to almost 100 acres and border upon two other true landmarks of the city in the form of the Sforza Castle and the Arch of Peace. The 15th-century citadel, is home to a number of the city’s art collections and museums - including an unfinished masterpiece by Michelangelo and the perfect spot for soaking up Milan's rich history and culture.

In fact, it is no exaggeration to say that Milan is renowned for being jam-packed with art. The city was at the centre of some of Europe’s most historically significant art movements – from 14th-century Gothic art under the Visconti family, to Futurism at the beginning of the 20th century – and this is reflected in the quality and breadth of its museums and art galleries.

If you want to experience just a taste of how much is on offer, then the Pinacoteca di Brera a public art gallery, is a great starting point. Home to pieces from icons including Raphael and Titian, artists are sure to find inspiration as they wander through the halls filled with some of the world's most breathtaking artwork.

Continuing your stroll through the city, make sure to stop by Piazza Mercanti, the central city square which houses 'palaces', offices and statues, as well as the old town hall dating back to 1233. You'll feel like you've stepped back into Medieval Milan as you take in the architecture!

And after enjoying its cultural and artistic delights, why not keep the theme going - also indulging in a little retail therapy - by making a beeline for the famed Galleria Vittorio Emanuele II. One of the oldest shopping malls in history, its two glass-ceilinged arcades date back to the 1860s and boast impressive architecture to boot - making it a true cathedral to commerce that proved so iconic that the term ‘galleria’ has since become synonymous with many a latter day mall. 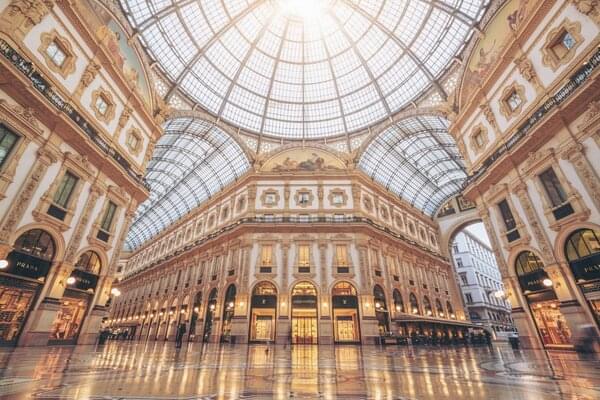 You can enjoy Aperitivo all over Italy, but in Milan it is as a ritual and they do it best – between the hours of 6pm and 8pm, the whole city seems to be enjoying a drink and light snack before heading home or out to dinner.

The food in Milan draws on the bounty of the surrounding mountains, coastline, lakes and verdant farmland. It is rich and hearty with meat and rice taking centre stage. Signature Milanese dishes include saffron risotto (Risotto alla Milanese), breaded veal cutlet (Cotoletta alla Milanese) and the traditional Christmas loaf, panettone.

Head back to any of the numerous artsy restaurants in the Navigli neighbourhood for some great dining choices. Early evening may be one of the best times to enjoy the beauty of this location - the street lighting and the still waters creating a majestic sight.

From spellbinding historic and architectural delights to its reputation as a fashion and cultural powerhouse, there is plenty to enchant a visitor to the city of Milan.