Malta is regularly hailed as one of the Mediterranean’s best diving destinations with plenty of natural reefs and a variety of fascinating marine life to explore. More intriguing perhaps, are the number of historical wrecks dotted around the coastline.

Some of these ships and aircrafts met their watery fate in the white heat of battle during World War II. Others were strategically placed on the seabed to give divers a richer underwater playground to explore.

Whatever your level of interest or diving experience, Malta most definitely has an underwater wreck for you. Here are a handful of spellbinding sunken sites to get you started.

Malta has a few sunken airplane wrecks scattered around its shores, including a Junkers Ju 88 in Baħar iċ-Ċagħaq, a Fairey Swordfish in Sliema, and a B-24 Liberator Bomber in Marsaxlokk. High on the list for most divers is a WWII Bristol Blenheim Bomber, located 500m off the coast of Xrobb l-Għaġin, towards the southeast of the island.

This Bristol built, twin-engine light bomber, served in the British Royal Air Force and formed part of the No. 18 Squadron. On the 13th of December 1941, while returning to Malta from a mission in Kefalonia, Greece, an Italian enemy aircraft attacked the Blenheim, causing damage to its port engine. Despite the crew miraculously making it all the way back to Maltese waters, flying little more than 30m above sea level, the pilot was unable to land in Luqa’s airfield and was forced to ditch the plane at sea. The Blenheim struck the water tail first, close to a local fisher boat who came to the crew’s rescue.

Today, the eerie, disintegrating Blenheim bomber - with its intact wings, open cockpit, and bent propellers - lies on a bed of sand and small reefs at a depth of 42m. Due to occasionally strong currents, this site is recommended for more experienced divers. 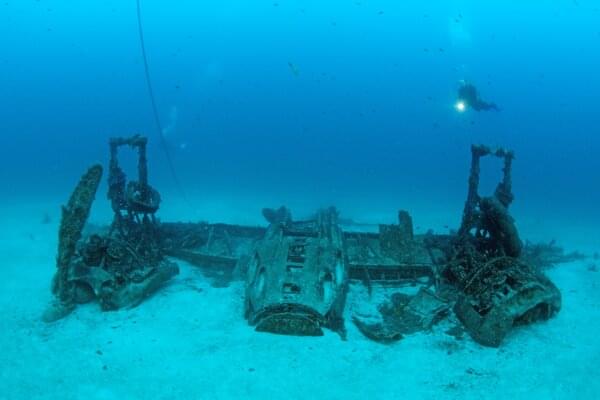 The P31 Patrol Boat is the only diving wreck off Comino’s coast. This former East German minesweeper was sold to Malta in 1992 where it was used as a patrol boat by the Maritime Squadron of the Armed Forces of Malta until 2004. When she was decommissioned, the vessel was cleaned and painstakingly scuttled for scuba diving.

The P31 diving site lies on the white sands between Lantern Point and Cominotto, at a depth of around 22m. It’s a fantastic wreckage excursion, with plenty of swim-throughs and easy exits punctuating the vessel’s rusted, algae-covered hull. The marine life around the wreck is also pretty great. Here you’ll swim with soft-bodied nudibranch, fang-toothed moray eels, camouflaged scorpionfish, and sucker-legged octopus. Some divers have even spotted whip-tailed stingrays gliding across the seabed from time to time. 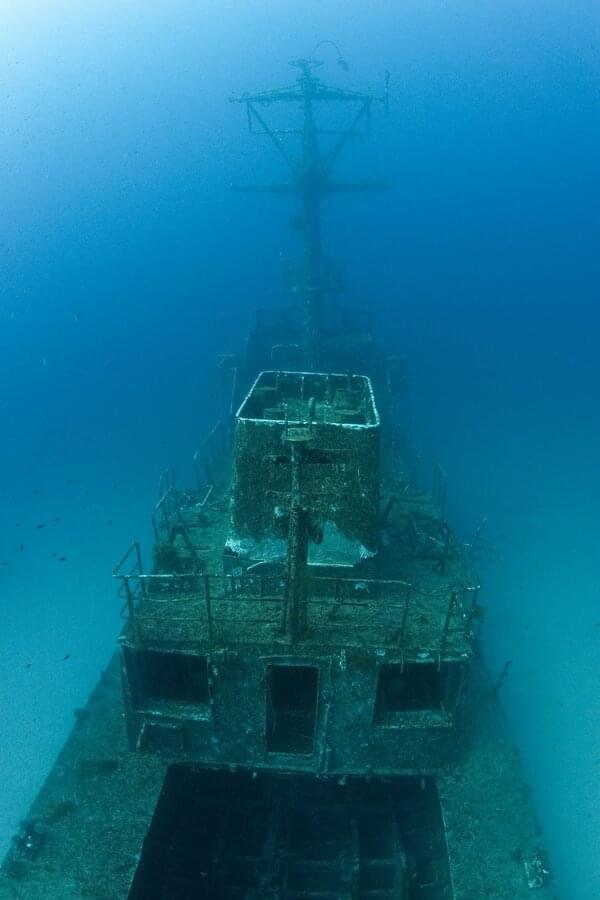 Purposefully sunk off the coast of Ċirkewwa in 1991, the 40-m long Rożi tugboat has become one of Malta’s most popular diving sites. The steel vessel was built in 1958 in the United Kingdom and sold to Malta in 1972, where it operated in the Grand Harbour of Valletta. Today, the tugboat’s exterior remains pretty much intact, 20m-tall mast and all. The boat’s engine and propellers have been removed to give divers more space to swim through its corroded nooks and mossy innards.

It’s also a relatively easy site to reach. Starting near Ċirkewwa’s lighthouse, divers will pass over a stunning reef and head towards the wreck, which lies some 150m away. A large yellow buoy overhead marks the spot. The empty boat shelters plenty of fish too, everything from schools of sea bream and rainbow wrasse to lone barracudas, moray eels, and eagle rays, depending on sea conditions.

Not too far off from Rożi is the well-known sunken Madonna Statue, making for a perfect diving excursion combo. Following the coastline, the seabed drops suddenly, with the surrounding rocky walls covered in a lattice of tunnels, swim throughs, and alcoves. You’ll find the statue of the Holy Mary in a small alcove here, approximately 18m deep. It’s an ideal try-dive for newcomers to the scuba scene.

And if you’re searching for more shipwrecks to explore, then be sure to check out the P29 - sister ship to Comino’s P31 - which also lays nearby on Ċirkewwa’s sandy bed. 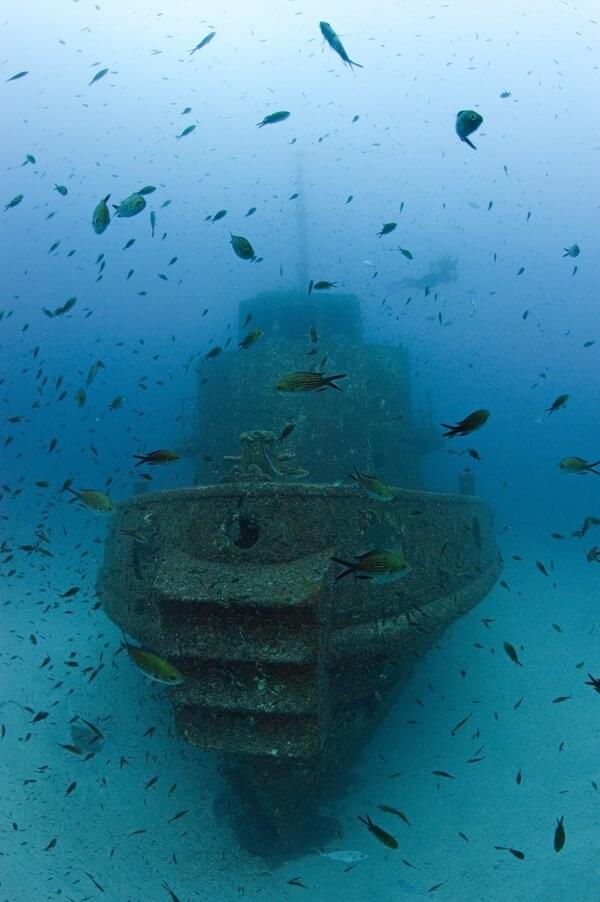 The MV Um El Faroud oil tanker is one of the biggest and greatest diving wrecks in Malta. This 115m-long Libyan refined fuel transportation vessel suffered a tragic gas explosion in 1995, while anchored in Malta’s dry docks. Damaged beyond repair, the tanker was later scuttled as an artificial reef and sunk at a 40-metre depth off the coast of Wied iż-Żurrieq. A memorial plaque was placed on the front of the bridge in honour of the nine Maltese dockyard workers who died as result of the explosion.

The tanker has been excellently scuttled. All doors, windows, and apertures were cleared for easy scuba diving access. Though, in truth, no diver need bother with these fiddly entry points if they don’t feel up to it. In November 2004, a violent storm split the tanker crosswise, along the fissure caused by the explosion. Strong currents pulled the two halves apart, cracking the wreck open for divers to enter freely. The site is also home to legions of fish, including tuna, jacks, and barracuda. 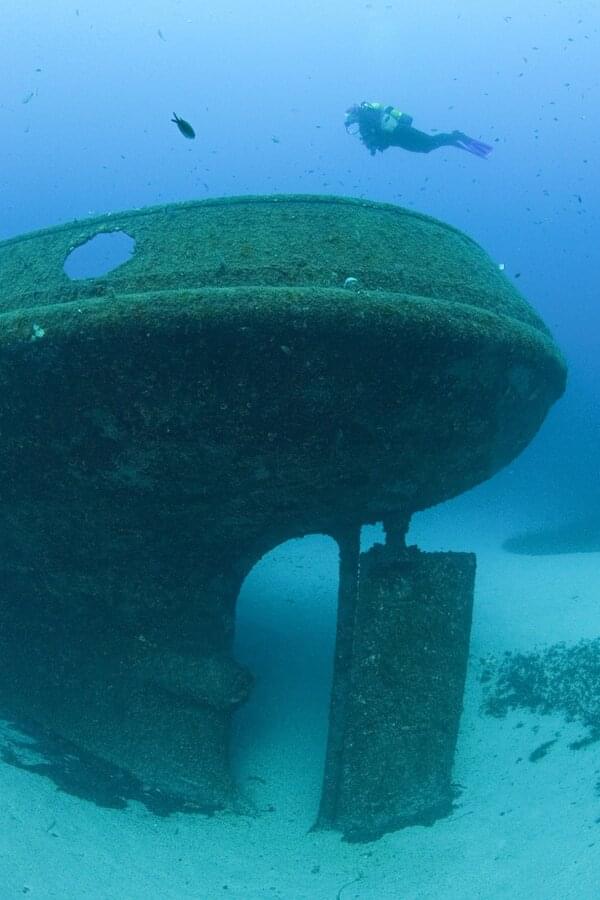 Thanks to Malta’s warm climate, it’s possible to scuba dive here throughout most of the year, with June to September usually providing optimal conditions. The island also boasts an abundance of excellent diving academies who will be able to show you the ropes and guide you to the very best diving spots. Happy diving and always remember to respect the sea.