Portrait of an Artist - Tonio Mallia

A hundred years ago, T.S. Eliot sat on a bench at Margate shelter and penned some few verses from what was to become one of the greatest works in English literature: The Waste Land.

In that unassuming location he connected nothing with nothing, contemplating ‘broken fingernails and dirty hands’, probably expecting nothing to come of it, certainly not the masterpiece that revolutionised the art of poetry. There was no heroism in the act of writing, no disillusioned hope in the power and beauty of poetry which would save the world from the decay and ruin that daily threatened to consume it. As it were, history was nowhere near kind to the British coastal town of Margate, with its bleak and boarded-up shops, its ominous dystopian towers and rundown and abandoned arcade. The shelter too, now a graded building, lost some of its windows. Incredibly, Margate was turning into a worthy setting for T.S. Eliot’s wasteland.

But it was not to be. Over just a decade ago, Margate received the attention it duly deserved: the Turner Contemporary art centre was opened, the arcade rebuilt, and new coffee shops and art galleries embellished and animated the Old Town. Only a creative practice - such as the arts - could counter such decay and dereliction. Indeed, in the finality of such places, they are nonetheless able to leave an impression on the beholder - perhaps, the greatest - to communicate some hidden quality of reality. They are, in other words, not simply purposeless and hopeless sites in the natural or built environment but may act as interlocutors in the drama of mankind’s relation to place, to other beings in space, to oneself and, ultimately, if we allow it, to what might be completely other, transcendent even.

There is an uncanny relation between the hopelessness of T.S. Eliot’s poem and the physical reality of the world envisioned by Tonio Mallia in his new series of paintings in the exhibition Bellum in Mundum (‘war on the world’). There is also an echo of Margate (prior to its regeneration) in the former ‘Flower Power’ agricultural site and garden centre at Ta’ Qali. Completely abandoned for over a decade, overgrown with weeds and rusty glasshouse frames, the site provided an excellent filming location for a trailer-cum-music video capturing the ethos of the exhibition. Nor was this the first time the site was earmarked for its filming potential, having also featured in Michael Bay’s 13 Hours.

It is a small wonder that creativity may restore some measure of dignity even to the most peripheral, disregarded and unproductive scenarios. In the case of the exhibition trailer, a girl walks among the debris, sits and broods - not unlike Eliot -raises her arms and tilts her crowned head, all the while singing to Neil Young’s After the Gold Rush ‘in the yellow haze of the sun’.

There is perhaps no lament as powerful as that of a child who sees not the face of the mother but her back, drifting away, beyond reach, beyond earshot, beyond the calm soothing words that it’s going to be alright. Mother nature is on the run, and the child can either choose to stay or chase after it. Yet, be it one or the other, whatever the choice is sure to be its swansong.

Tonio’s paintings, like T.S. Eliot’s poem, wouldn’t have it otherwise concerned as they are with the main question of whether or not anything of worth can truly grow from death and decay, from the loss of innocence, from the ‘stony rubbish’, from the nothing which connects to nothing. 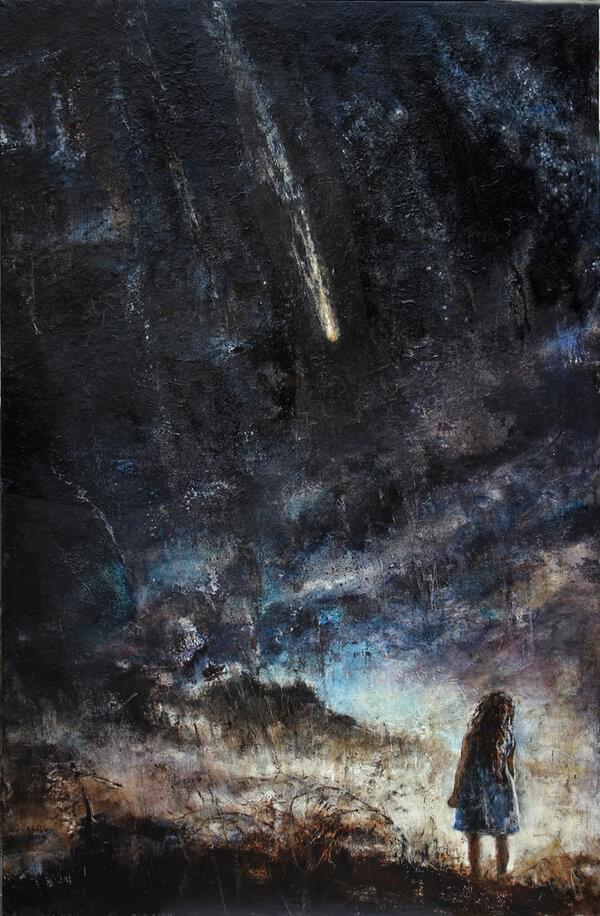 Bellum in Mundum is open to the public until 11 September, at MUŻA, Malta’s National Community Art Museum, Valletta.