Mdina, Malta may be dubbed the Silent City due to how ghostly quiet it falls after dark, but Malta’s old capital is bursting with centuries of tales to tell.

Every inch of Mdina’s winding, stone-slabbed streets are lined with palaces, chapels, grand townhouses, museums, and dungeons. There’s even a sprinkling of George R.R. Martin approved sword-and-sorcery to get lost into.

Book your flights to Malta to discover the treasures of Mdina, the old capital of Malta. 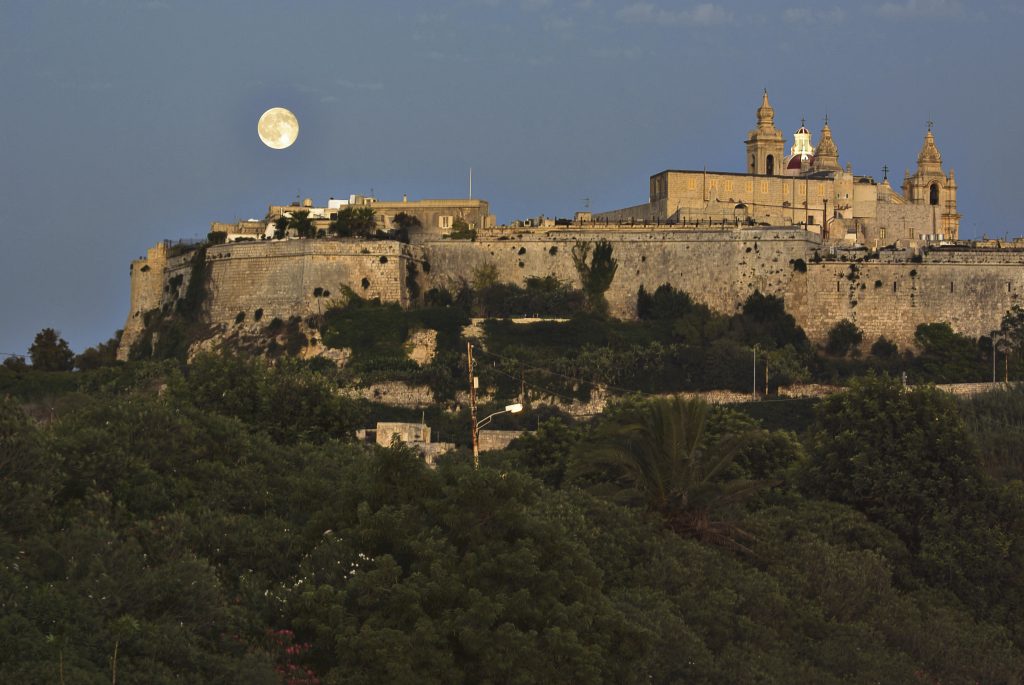 While you won’t find any hop-on hop-off buses touring these narrow lanes, you can hop onto a karozzin. These traditional horse-drawn carriages date back to the mid-19th-century and are popular with tourists looking to gallop around Mdina’s highlights. You’ll come across plenty of karozzini waiting by Mdina’s gateway bridge. Many of the coachmen have ties to the area that go back generations and boast the intimate knowledge to prove it. So, feel free to ask your driver any questions or for recommendations during your ride.

Upon entering Mdina’s gargantuan walls, you’ll immediately be greeted by the splendid 18th-century Palazzo Vilhena on your right. The palace itself, with its stately u-shaped forecourt encircled with balconied loggias, is regarded as one of the finest examples of French Baroque architecture on the island. Once a hospital for cholera and tuberculosis patients, and briefly a sanitorium, today it houses the Museum of Natural History with shelves heaving with geological and paleontological wonders.

For a touch of the macabre, head next door to the Mdina Dungeons. A narrow staircase will lead you down to these dimly-liy, underground passageways that will whisk you through a potted history of torture and punishment in Malta, going all the way back to the Byzantine era, the Knights and the French, through till when the island fell under British rule in 1800. It’s more kooky fun than shock horror, so the squeamish shouldn’t be put off.

After you’ve emerged from the dank dungeons, treat yourself to a dignified pick-me-up with a stop at Palazzo Falson. This medieval townhouse was home to Maltese nobility and currently exhibits some 45 collections of antiquities, ranging from jewellery and paintings to arms and Oriental rugs. The displays are certainly fascinating, but the real treat here is arguably the rare opportunity to wander around a genuine Mdina town house, something even most Maltese don’t get to do that often.

At the heart of Mdina, Malta, is a pretty piazza dominated by the grand St Paul’s Cathedral. The namesake saint, who as detailed in the Book of the Acts of the Apostles was shipwrecked on Malta while en route to Rome to be executed, is said to have met with Malta’s Roman governor Publius upon this very site. After Paul miraculously healed the governor’s father from a fatal fever, Publius converted to Christianity and went on to become Malta’s first bishop. The cathedral was erected in honour of the apostle’s many miracles on the island.

The original cathedral was in actual fact built some time later, in the 12th century. But a cataclysmic earthquake in 1693 razed much of it to the ground. It was rebuilt in the Baroque style by Maltese architect Lorenzo Gafà between 1696 and 1705 who incorporated parts of its earlier incarnation that had survived the disaster, including the altar painting by famed Baroque artist Mattia Preti and the apse of Paul's shipwreck. The cathedral, with its colourful frescoed ceilings depicting the life of St Paul and its lavish marbled floor of inlaid tombstones, remains an astonishing marvel.

Play a Game of Thrones in Mdina, Malta

Cosplayers wanting to live out their Game of Thrones fantasies will be happy to discover Mdina is a real-life King’s Landing, with several season one scenes having been filmed here. Catelyn Stark rode across Mdina’s moat bridge in episode three. The exterior of Littlefinger’s brothel was housed in peaceful Mesquita Square, which is also where Jamie Lannister had a heated skirmish with Ned Stark and guards. Ned also shared a fraught tête-à-tête with Cersei about the Lannisters’ incestuous secrets in the gardens of St Dominic’s Priory. It’s here where Cersei declares: ‘When you play the game of thrones, you either win or you die.’ You may also wish to keep an eye out while browsing Mdina’s souvenir shops as some sell decorative replicas of Stark, Lannister and Targaryen swords, daggers and other such arms.

As the sun sets and the gas-lit lamps come to life, washing the streets in a fiery, amber glow, you’d be easily forgiven for thinking you’d actually time-warped back to medieval times, so untouched by modernity has this citadel remained. Bask in the pin-drop quiet of Mdina by night or liven things up a little by joining a night-time ghost walk where you’ll encounter headless brides, phantasmal priests, and haunted houses.