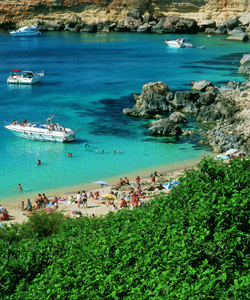 When in Malta, you are never too far away from a beach or the sea. With a good choice of beaches all over the island, grab a sun-lounger, a book and relax.

Due to its limited size, Malta’s beaches tend to be much smaller than what you’d find elsewhere, but as usual with this tiny island, what it lacks in size, it more than makes up for in quality. Malta has a number of beaches spread throughout the islands, six of which are Blue Flag rated.

St. Georges Bay – This Blue Flag rated beach is a recent addition to Malta’s list of beaches. Located centrally just next to Paceville, Malta’s nightlife centre, the beach is easily accessed and its sheltered position means great swimming all year round.

Bugibba Perched Beach  - Another Blue Flag rated beach, the Bugibba Perched Beach is a man-made sandy beach like St George’s Bay. Its location, along the popular Bugibba coastline, makes it easily accessible for those staying at one of the many hotels in the area. The beach also features seasonal lifeguards, and other facilities such as toilets and showers.

Mellieha Bay – Possibly Malta’s largest and most popular beach, Mellieha Bay beach is a long stretch of sand at the mouth of the large Mellieha Bay. The beach has a large amount of facilities, including snack bars and restaurants, showers and toilets. Thanks to its unique position, this Blue Flag rated beach affords the adventurous type plenty of opportunity for exploration, thanks to the stunning countryside and nature reserves in the vicinity.

Qawra Point – Located just off the Qawra promenade, this small stretch of sand and rock offers snorkelers and divers some stunning marine-life to observe.

Ramla l-Ħamra – Literally ‘Red Sand’, Ramla l-Hamra is the most popular beach on Gozo. Like most beaches on Malta’s sister island, the road leading to the beach is a winding one that snakes through a valley (as opposed to one that runs parallel to the beach). This adds to the feeling of seclusion and puts you more in touch with the surround natural environment. The beach is also Blue Flag rated.

Għajn Tuffieha – Also known as Riviera Bay, this is a sandy beach located in the North-West of the Island forming part of a string of bays that provide some of the best swimming in Malta. But it’s this beach that lays claim to the most stunning views. This secluded beach is nestled in an amphitheatre-like formation of scrubland, trees, and impressive rock formations.

Golden Bay – Għajn Tuffieha’s neighbour to the north, Golden Bay is a favourite amongst Maltese and tourists alike – it’s more spacious and far deeper than Ghajn Tuffieha, and there are far more facilities available.

Malta rewards the intrepid adventurer, so if the above aren’t enough for you, try exploring some of these beaches.