Temples of Malta and Gozo 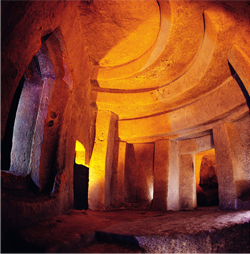 When it comes to religious worship, Malta doesn’t do half measures. This predominantly Roman Catholic nation has 350 churches packed within the space of 316 square kilometres – many of them architectural masterpieces.

However, well before the dominance of the Roman Catholic religion, the locals erected equally impressive temples, burial chambers, and other sacred structures. Some of these awe-inspiring Megalithic temples are over 7000 years old. Malta is a pre-history buff’s paradise. Not only are there a number of these magnificent structures intact and open to the public, but because of the island’s small size, the temples are no more than a short 30 minute drive apart. The main temples are six in number, all UNESCO world heritage sites.

Ġgantija Temples – Literally ‘Gigantic’, the temples of Ġgantija are situated on the Island of Gozo. These fascinating Neolithic structures predate the Egyptian pyramids. The site consists of two temples surrounded by a boundary wall. Their impressive size is made all the more impressive by the fact that the temples predate the invention of the wheel. It appears that most of the massive stones were moved into place using spherical stones as rollers. Archaeologists have found evidence of animal sacrifice and altars for worship.

Ta’ Ħaġrat – Located just outside the village of Mġarr, the temples are amongst the oldest and best preserved in Malta.  Like many other Megalithic temples, those at Ta’ Ħaġrat boast an impressive façade with colossal-sized stones creating a large portal.

Ħaġar Qim – The temple structures at Ħaġar Qim are amongst the most well-known. The temples are the site of some impressive discoveries, including statues and carvings representing a Maltese version of a fertility goddess – a rather well-proportioned woman known as the Venus of Malta.

Mnajdra – The temple complex at Mnajdra is less than a kilometre away from Ħaġar Qim. Like many other temples, its outline follows a clover-leaf shape. This shape, together with its position would have had astronomical significance, possibly acting as a cue to commence preparations for the harvest, or to perform sacrifices (bones and sacrificial tools were excavated from the site).

The Tarxien Temples – Some of the most interesting and beautiful stone-work can be found at these temples. While the structures are as imposing and impressive as other temples, it is the reliefs and stone carvings that set this site apart. Here, you’ll find spiralling patterns chiselled into the stone, as well as pictures of goats, rams, bulls and sows in relief.

Skorba Temples – Located in the outskirts of Żebbiegħ, the site is not necessarily the best preserved of the Maltese temples. However, its construction represents an incredible feat – the nearest source of globigerina limestone is over a mile away from the site. Considering the stones used in the construction of this temple weigh upwards of a tonne, its construction well over 3000 BC can only be described as proof of early man’s ingenuity.