The Typical Festa in Gozo 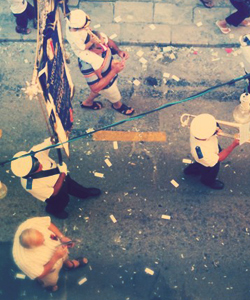 When it comes to a village festa, the Gozitan’s go all out with colourful decorations which line the streets, a marching band to entertain the crowds, beautiful fireworks which light up the sky and not to mention, mouthwatering traditional delicacies.​

Festa season on Gozo kicks off in May and continues straight through till September, with Rabat’s Feast of Our Lady of Graces on the 1st Sunday after September the 8th.  Each village has its own patron saint and the village Festa is held in honour of this saint.

What to look out for

The typical Gozitan Festa is very similar to its Maltese counterpart. While it is a religious celebration, in reality, the Festa is one big, noisy party lasting a few days. The streets of the town or village will be decorated with banners and statues relating to the patron saint, and the decoration reaches its climax at the town church, which will be festooned with lights, banners and all manner of statues.  Even the church’s interior will be more lavish than usual, adorned with tapestries and artefacts which are usually hidden away throughout the rest of the year.

Fireworks play an important role in the village feast. While the traditional sort featuring aerial bursts of colour and sound are a highlight, pyro-enthusiasts will want to look out for some other exciting displays including the Catherine’s Wheels. These are stationary fireworks displays consisting of a wheel with fireworks strapped to the perimeter. When lit, the wheel erupts into a spinning, vortex of flame with a deafening whirl to complete the sensory assault.

Another traditional fireworks display includes Bombi or petards. Much like anti-aircraft fire, this fireworks display consists of launching exploding mortars high into the sky at various times of the day. The noise can be absolutely deafening, and many uninitiated with this custom have been known to take cover upon hearing this sound for the first time.

Festa revellers enjoy their food, which is why the streets of the village around the church (the focal point of the celebration) will be strewn with vendors selling all kinds of local and not so local specialities. While the food on offer won’t necessarily meet with your nutritionists’ approval, it fits perfectly with the spirit of celebration. The more traditional delicacies on offer include Mqaret – a calorie laden, deep fried date pastry, and Qubbajt – handmade nougat with nuts and dried fruit.

The soundtrack to this sensual assault is the marching band – a group of uniformed musicians walking through the streets, playing traditional band music, while children follow them with their own toy instruments.