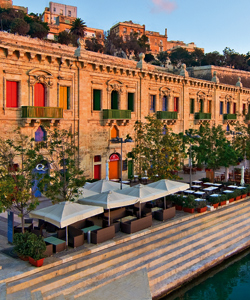 Positioned to enjoy some of Malta’s most picturesque views, the Valletta Waterfront is a popular destination for those seeking retail and entertainment.

Of great economic and cultural importance in the past, the Valletta Waterfront has recently been overtaken by a consortium, and modernised and transformed to suit the ever-changing requirements of this dynamic city. Situated on the Western side of the Grand Harbour, overlooking the picturesque fortified town of Senglea, the current incarnation combines retail, entertainment, and a transport hub, proving highly popular with both tourists and locals alike.

The Valletta Waterfront is essentially a collection of centuries-old warehouses where mariners of the past would moor their vessels, laden with everything from treasures to the more mundane requirements of everyday life in Malta. Ships would unload their cargo for inspection and customs by the representatives of the ruling Knights of St. John.

For those out in search of a relaxing evening of good food and entertainment, the Valletta Waterfront’s many restaurants and bars present a variety of offerings catering to different tastes. Most of the establishments have al fresco dining right at the water’s edge. The establishments’ indoor dining areas are situated inside the tastefully refurbished, historical stores.

Apart from a variety of restaurants catering to all tastes, the Valletta Waterfront also hosts concerts and other cultural events. From a New Year’s Eve fireworks display, to a seaside open-air concert, to the Jazz Festival, this world-class venue offers something for everyone.

On the practical side, the Valletta Waterfront is also a bustling transport hub. Offering water taxis, boat tours on traditional Maltese dghajsa, sea-plane tours (as well as transport to Gozo), and most importantly, the cruise-liner terminal. The latter handles well over half a million passengers per year and this number has been increasing steadily for the past decade.