The Resurrection of Valletta 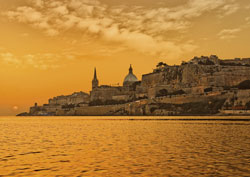 Having suffered extensive damage during World War II, Valletta has re-emerged as a glorious city changing through time to embrace modernity.

In 1798, the city was captured by a French expeditionary force. Their short rule would prove highly unpopular with the Maltese, who eventually would aid the British in overthrowing the French.

The Siege of Malta was a two-year period from 1798 when the French troops were forced to retreat to Valletta after an uprising by the local population. The British were carrying out a highly effective naval blockade denying the French vital supplies. By 1800, due to food and water shortages, and outbreaks of disease, the French abandoned the city, making way for a 164-year rule of Malta by the British.

During the British period, Valletta underwent more construction changes. These included the widening of roads and gates, as well as some notable buildings, including the Chamber of Commerce building on Republic Street, and the Royal Opera House, also on Republic Street. The latter, like many other famous buildings in Valletta, was almost completely destroyed by German bombing campaigns in World War 2, and is currently being redesigned and rebuilt by the famous Italian architect Renzo Piano.

During the Second World War, Valletta experienced some of the heaviest bombardment in Europe. Much of its priceless architectural heritage was razed to the ground, and a period of rapid reconstruction happened immediately after the war.

Modern Valletta is a UNESCO world heritage city, living up to Benjamin Disraeli’s description of it as a "a city of palaces built by gentlemen for gentlemen".
1