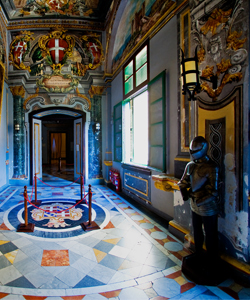 Valletta is brimming with striking palaces and gems that take visitors back in time to an idyllic era.

Valletta is resplendent with rich architecture. At every corner, visitors to this magnificent city are confronted with architectural gems and masterpieces; but it’s the palaces that enjoy pride of place in this majestic city.

The most well-known is the Grandmaster’s Palace, designed by renowned Maltese architect Girolamo Cassar. This opulent palace was used as the official residence of successive Grandmasters. Today, it contains the House of Representatives and the Office of the President of Malta, as well as the Palace Armoury, an unrivalled collection of medieval weaponry and ornamental battle-dress.

Situated on the highest point in Valletta near its entrance, the Auberge de Castille is an impressive Baroque building. Originally an auberge for the Langues of Castille, León and Portugal, the building is now the Office of the Prime Minister. Unlike other palaces in the city, Auberge de Castille features large, wide steps at its entrance, making it all the more imposing as a structure. Recently renovated, the beautiful façade is matched by an equally impressive, Baroque interior.

Housing the National Museum of Archaeology, the Auberge de Provence is situated on Republic Street.  Yet another building by Girolamo Cassar, the impressive structure features an opulent Grand Salon.

The Auberge d’Italie is another fine example of an auberge designed by Girolamo Cassar. The building features an impressive stone coat of arms on the façade.

Casa Rocca Piccola is unique in that it is still privately owned and inhabited, yet open to the public for daily tours. The tour includes over 12 sumptuously decorated rooms, walled gardens, and an underground network of tunnels and wartime shelters.