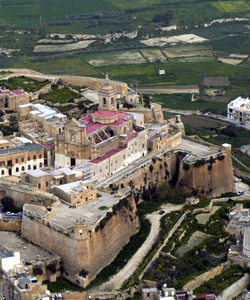 Standing proudly atop the heights of Gozo’s capital Victoria is the Island’s most recongnizable landmark – the Cittadella.​

This medieval, walled city is a must-stop for history-buffs, intrepid adventurers, and even those simply wishing to get an excellent vantage point to survey the rest of the Gozitan countryside.

Built on a plateau, the site’s elevation and steep sloping sides made it an attractive choice for locals to set up habitation, facilitating defence and security. First occupied first during the Bronze Age, around 1500 BC, archaeological discoveries have shown a string of settlements ever since.

The Roman occupation of Malta and Gozo included significant development of the site, including a fully-fledged Acropolis.  However, it was during the late 16th century that the Cittadella underwent its most significant alterations. Under the rule of The Knights of St John, Cittadella was significantly fortified to protect the Islanders from raiding Moslem forces and corsairs. Ultimately, however, the Cittadella was still sacked in 1551.

Today, visitors can meander about the town’s small winding streets, exploring the embankments and well preserved fortifications. Cittadella also features some great restaurants, snack bars, and souvenir shops. Its most famous attractions though, are the 17th century Baroque Cathedral, designed by Malta’s celebrated architect Lorenzo Gafà , as well as a well-preserved prison, complete with ancient graffiti.