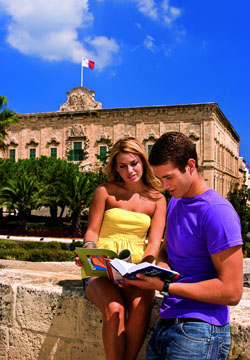 With English being one of Malta’s official languages, learning English together with beautiful weather make Malta the best place to learn English. ​

are Maltese and English. A reputation for its hospitality together with excellent weather conditions make it a safe haven for students willing to learn English in Malta.

Rich in culture and heritage, Malta has benefitted from its 160 years of British rule which has given the islands its distinct fluency in the English language. Students from all over the world have the opportunity to come to Malta and practice the English language since it is widely spoken. Newsagents also sell English newspapers on a daily basis that will help with further education of the language.

In spite of Malta’s size, the country is beaming with activity. During the summer months, students will get the opportunity to enjoy a wide array of festivities and water-sports through the islands – Malta is the ultimate location for scuba-diving, windsurfing, waterpolo and fishing. During the mild winters, the countryside is colourful with wild flowers with the temperature only going down to 12 degrees Celsius.

English is spoken everywhere and almost everyone can speak it so expect your English skills to get a good boost, making Malta the ideal destination for students to learn English. Besides having access to the English media through newspapers, radio and television, the language is spoken in restaurants, cafes, tourist resorts, beaches and just about everywhere.

Best of all though, Malta can be reached by air from most European cities between one to three hours. Malta is a Member State of the European Union and is within the Shengen Area. If you are an EU citizies, you are entitled to travel freely around the European Union’s member states.