NOW SPRING HAS FINALLY SPRUNG ACROSS THE ISLANDS, WHAT BETTER WAY TO WHILE AWAY AN AFTERNOON THAN VISITING ONE OF MALTA’S MOST RENOWNED GARDENS, CATCHING SITE OF BUDS BLOSSOMING IN PATCHWORK FLOWERBEDS, ALL AUGMENTED BY A FRIENDLY HELLO FROM ONE OF THE RESIDENT PEACOCKS.

If this sounds like your cup of tea, don’t miss San Anton Gardens. Nestled in the town of Attard sits this surprising walled oasis, a well-loved escape in this suburban neighbourhood celebrated by tourists and locals alike.

Although the gardens are a prime destination in their own right, the gardens neatly border San Anton Palace. The impressive palace was initially built between 1623-1636 as a summer residence for the Grand Master of the Order of St John, Antoine de Paule. During the French occupation (1798-1800) the palace served as a meeting place for the Maltese insurgents who rose up against the French. After 1800, San Anton became the Governor’s residence during the British rule, and since Malta became a Republic in 1974, the palace has served as the President’s official residence.

For over 100 years, the gardens remained hidden from public view, eventually opening to the masses in 1882. It doesn’t take long to notice they are well planned and adorned with walkways, ornamental ponds, fountains sculptures and an aviary. As you enter along the pathway flanked by plants, you will pass under an arch and into the gardens. You will readily appreciate the garden is a botanical delight with mature trees, old stone urns, fountains, ponds and flower beds. It’s a formal affair, with rustic touches and holds a wide variety of plants and flowers, such as sprawling hibiscus and towering Mexican blue palms.

On your right as you head around the perimeter you will enter the oldest part of the grounds, the Eagle Pond (this is located at the opposite end of the gardens to the palace). It dates back to the gardens’ 17th-century inception. 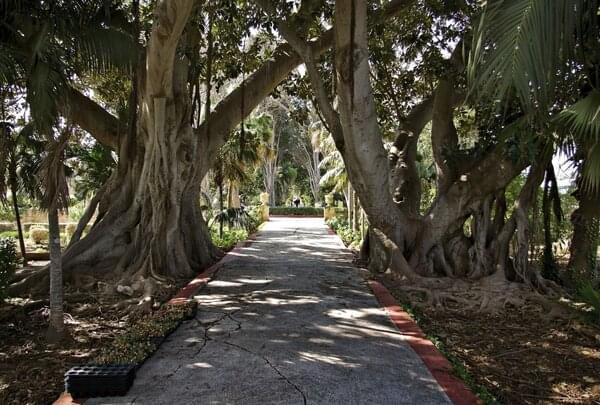 As you continue along the path, two striking trees may catch you eye for their unusual ethereal appearance, and these are the Moreton Bay Fig trees. As a unique photograph opportunity – they are not to be missed! Further, towards the palace, you may stumble across the Melitenesia sub gardens. This area was designed to represent the local landscape, with indigenous and common plants to Malta tucked into rockeries. Here you can breathe in the heady  aroma of fresh rosemary and thyme and feast your eyes upon the Il-harruba the carob tree, a tree deeply engraved in local culture and folklore. Benches dot the landscape, making it an excellent retreat for bookworms. A little further along sits a topiary maze, a fabulous place for children to explore.

Head along Europa Avenue. This passageway bears a variety of tree and plant species from around the world, some planted by visiting heads of state such as the Jacaranda trees. Moreover, some of the trees are over three centuries old and are of immense value in their own right. You’ll arrive at a pond in the centre of the gardens, home to several nesting black swans. These aren’t the only animals you’ll find, the next pond to greet you is home to an abundance of terrapins!

Another point of interest in the gardens is the view across the citrus groves. The 600 citrus trees loaded with oranges frequently give a boost to the Malta Community Chest Foundation as they culminate in the annual Citrus Festival. Gardeners cultivate the trees throughout the year to produce the juicy fruit, with local school children harvesting the yields. The festival is usually held in January and celebrates the goods of the gardens with proceeds going to charitable causes. 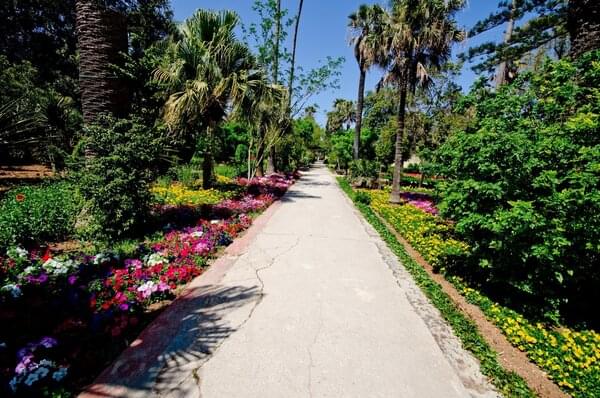 A further reason many people flock to the gardens for is due to its connections with the cult TV series ‘Game of Thrones’. The beautiful San Anton Palace and gardens were used multiple times in Season 1 for scenes involving the stables and corridors of the Red Keep.

Nowadays, the gardens are also home to the Annual Horticultural Show, and during summer, the spacious central courtyard becomes an open-air theatre for drama and musical performances.