Just how many reasons do you need to visit Prague?

Prague doesn’t need a brochure to sell itself. Thirty years ago, the city (Praha as the Czech pronounce it) was a mystery to world travellers; now, however, it is one of the most popular destinations in Europe and for many good reasons. So how many would you like me to list?

Well for a start, while the city’s nickname is ‘The City of a Hundred Spires’, it is in fact decorated with nearly a thousand towers and spires! Then there are Romanesque chapels and cellars, Gothic cathedrals, scores of palaces, churches, over 200 parks, gardens and squares, unique Cubist architecture, countless delicious local Czech beers and delicious food. All of which makes it a place with no parallel in the world.

As an added bonus, it is a very affordable city compared to its European counterparts. Enough reasons to go see it?

Millions do so each year, so timing your visit is very important. If you don’t like crowds, best visit between January to March/April and October to December. Whatever date you choose though, Prague is abuzz with street fairs, exhibitions, concerts and beer. It’s like a nonstop carnival is being played out on the cobblestoned streets.Prague’s picturesque downtown veils both a dark legacy and a resilient past. Dating back to about A.D. 870, the city has withstood numerous overthrows, invasions, fires and floods. It's this reputation for survival and perseverance that has made the Czech capital so fascinating.

Today, the storied churches, narrow streets, daunting hilltop castle and statue-lined bridges create the scene of an urban fairy tale where even the most jaded traveller would have trouble resisting this city's charms.

With so many reasons to visit, how do you best spend your time?

Few cities can claim to have such a picturesque river as the Vltava, the largest in the Czech Republic and which divides the city; The Castle District and Lesser Town are on the left bank and the Old Town, New Town, and Jewish Quarter on the right bank.

Within the city confines, it's spanned by over thirty bridges and footbridges. Its water gently laps the edges of ten islands and each day dozens of steamers, rowboats and pedal boats glide through its waters. It's the soul of the city and is perfectly complemented by the medieval Charles Bridge. This 1,700-foot long medieval walking bridge, with its Baroque statues connects the two sides of Prague.

The Vltava embankment is a popular part of Prague community life. Farmers’ and flea markets are held here, and in the summer, people stroll, dance, take part in sports, and organise exhibitions, while in the winter, one of the boats anchored here is turned into a sauna.

The river gives Prague an aura of romance and mystery which makes one fall in love with the city on first sight and enough of a reason for honeymooners to choose Prague as their destination of choice.

According to the Guinness Book of World Records, Prague Castle, dating back to the 9th century, is the largest ancient castle in the world.

The iconic structure is the inspiration for fairy tales, films and television shows, as it is one of the most substantial remnants of medieval times. The Castle is really more of a village or small town on the top of a hill, overlooking expansive Prague – and what a breathtaking view it is! 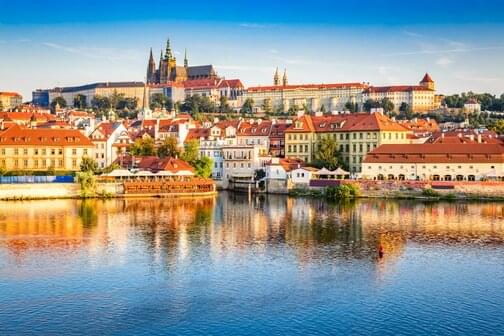 You can admire the ancient heart of the city from the observation deck of the tower of Old Town Hall and discover the charm of the Lesser Town roofs from the tower of St Vitus Cathedral.

Unforgettable views are also possible from the Petřín lookout tower, from Letná Park or from the ramparts of Vyšehrad.

An unusual sight arises for those who climb Vítkov Hill, dominated by the majestic statue of military leader Jan Žižka. You'll get an unique view of the illuminated panorama of Prague Castle from here, especially in the early evening. If you are interested in exploring the castle and the area surrounding it, then be sure to keep a full day aside.

The Old Town Square is where the magic happens. Walk around it a couple of times, and you will find everything you could possibly be looking for – from pub crawls and magic to breakdance shows, you will never have enough of its vibrant energy. 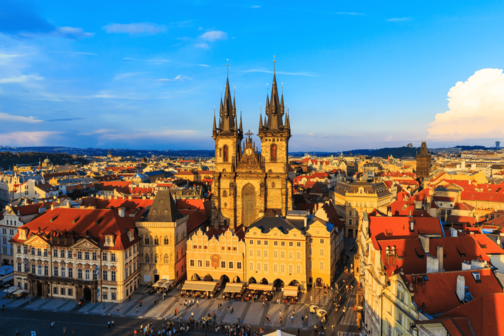 Restaurants, food stalls, churches, and a variety of shops surround the square with many alleyways begging to be discovered. Located right on the square are two of Prague’s symbols: the Church of St Nicholas and the Astronomical Clock. Over 600 years old, it is one of the oldest (still functioning) astronomical clocks in the world. Tucked away in a quiet street away from the touristy hustle and bustle, you’ll find the Lennon Wall, the Czech expression of freedom from the communist era. It is a colourful tribute to the Beatles singer and a symbol of love and peace, where every inch is filled with Lennon-inspired graffiti and Beatles song lyrics, which constantly keep changing as visitors add their messages to it. 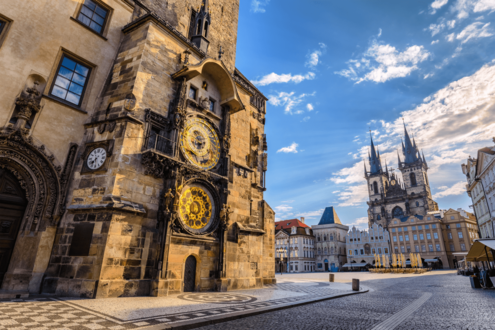 The hundreds of historic gardens and parks are truly some of Prague’s greatest treasures. The oldest of them was founded in the Middle Ages and more often than not, they offer breathtaking views of the city. The Palace Gardens below Prague Castle, the Petřín Hill gardens or Wallenstein Gardens are pre-requisites to visit.

Music is everywhere in Prague, and a startling amount of it is good. Charles Bridge, Old Town Square, the entire city... is just full of musicians – and talented ones at that.

Bars employ singers with guitars, cruise boats have live musicians, Churches have lovely choirs playing throughout the day and even walking around the streets of Prague there are musical surprises with repertoires ranging from traditional folk music to unconventional, original compositions.

At the other end of the scale from the variety of ad hoc performances to be found, the Prague Spring Music Festival, held over three weeks in May, is considered the height of the cultural calendar. It draws orchestras from around the world for dozens of mainly classical concerts, but also jazz, modern music, and vocalists.

At the start of June, the Prague Fringe Festival is a weeklong celebration of English-friendly theatre, comedy, dance, and well, whatever. The Signal Light Festival, held over a weekend in Autumn, features elaborate digital displays of light and music, projected onto the city’s historic buildings.

WORKING UP AN APPETITE?

Czechs prefer simple food done well. The national dish is roast pork, served with bread dumplings and sauerkraut. Look out, too, for Svíčkovánasmetaně: beef sirloin topped with a creamy sauce and served with dumplings, a dollop of cranberries, and a slice of lemon (to cut the cream). For drinks, the choice is easy: Czech beer is among the best in the world.

Most cities regard beer-drinking as a pastime, but here, it’s a passion. Czechs drink more beer per capita than any country on earth.

Those in the know say the best beer in Prague (although this point can be argued) is poured at Zlý časy in the Nusle district. Its twenty-four taps pour beers from small and medium-sized breweries both from the Czech Republic and abroad. Two dozen more reasons to visit!

From a cool beer to cooling your shopping fever. This can be achieved in a number of modern shopping malls (Palladium, Nový Smíchov, Chodov, Arkády Pankrác, and more) or on Pařížská Street, Prague’s most exclusive shopping avenue, home to many of the world’s top luxury brands.

If you want a souvenir to take home, Bohemian crystal and cut glass should be your first choice. Many shops, including well-respected Moser, will ship it home for you. Easier-to-carry items include deep-red garnet jewellery as well as hand-crafted marionettes and wooden toys. If you have time, take a tour to a glass factory.

Prague has undergone centuries of diverse cultural, social and economic development, which is reflected in its architecture.Among the most interesting witnesses to this dramatic transformation are technical monuments commemorating changes in the everyday life of our ancestors in comparison with the present day.

Prague is home to a many interesting technical buildings and other structures. This journey back in time will take you to places such as the Prague underground spaces with its vast collector system; the New Town Water Tower; the Nusle bridge; the Pacold kiln; Větrník, a former windmill; the Petřín funicular; the Křižík Fountain; and the exhibitions at the National Technical Museum. And also of interest, is the Wastewater Treatment Plant in Bubeneč, which helped Prague become one of the most modern cities in Europe at the beginning of the 20th century.

I began by asking how many reasons you need to visit Prague. I’ll end it by saying there are so many; several repeat visits might not even be enough to see all of them. But if I were you, I’d give it a go.